The conservation of the well on the courtyard 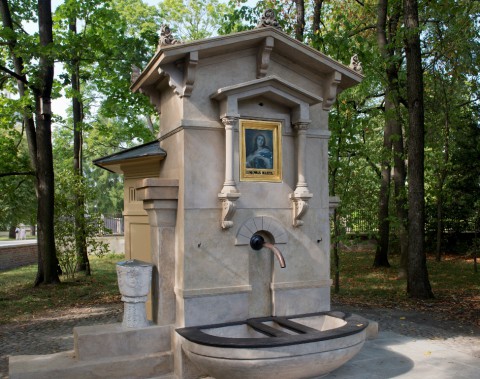 The well on the courtyard after conservations, photo by W. Holnicki

Developed in the Baroque period, the courtyard, with its characteristic division into two parts, survived until the early 19th century. In 1801, at the request of Stanisław Kostka Potocki, it was transformed into a Romantic court with a huge oval lawn and clusters of bushes in the middle and in the corners between the Palace’s galleries and wings. Wilanów’s wells had also been remodelled to align them with the new courtyard design. Their classicistic layout was designed by Chrystian Piotr Aigner.

Circa 1830, the courtyard was redeveloped again. The cluster of bushes at the centre of the lawn was replaced with a fountain basin, the southern well was removed and the northern one redeveloped by Aigner into a form corresponding to Nero’s sarcophagus. Later, in the mid-19th century, Franciszek Maria Lanci shaped the well into a neo-Renaissance chapel with a representation of Mary, as found on the famous painting by Bartolomé Murillo from the Museo del Prado in Madrid, painted on its metal plate.

Due to the external condition of the Wilanów well exhibition, the ageing processes are progressing much faster and are more intense than in the interiors with a stable temperature and humidity. Moreover, the environment consisting of high and low tree stands characteristic of the park landscape around the well increases humidity and the development of microorganisms, which have a damaging effect on wood, brick and sandstone and on the intensity of the corrosion of metals such as iron and cast-iron. The numerous repairs and conservation work performed since 1722, when the well was built, also had an immense negative impact on its condition.

Due to the EU funding, the well in the Palace courtyard was subject to complete conservation and restoration. The work focused on analysing and protecting the parts of the well with signs of destructive processes: cracks, crumbles or dampness. The sheet roofing over the pump was upgraded, and the wooden elements were proofed against fungi and mould with penetrating agents. The paint layer on the wooden elements was renewed, and the cast-iron and iron elements of the pump inside the wooden casing were cleaned of corrosion and rust-proofed. The conservation work also covered the sandstone and stone elements of the well.  After years of absence, a photographic copy of the painting of Virgin Mary in the original gold-plated frame was reinstalled in the shrine. The original of the painting is currently kept in the museum’s storeroom.

The conservation of the well on the courtyard was conducted as a part of the “The revitalisation and digitalisation of Wilanów, the only Baroque royal residence in Poland” project. The Project had secured support from the European Regional Development Fund under the Infrastructure and Environment 2007-2013 Operational Programme, Priority XI “Culture and Cultural Heritage”, Activity 11.1. Protecting and maintaining cultural heritage of over-regional importance. In accordance with the adopted Project Implementation Scheme, the investment was completed by 30 September 2015. The total value of the Project: PLN 18 854 348,06. The amount of additional financing: PLN 14 912 881,37 (European Regional Development Fund: PLN 12 675 949,15, and State Budget: PLN 2 236 932,22). For more information on the Infrastructure and Environment Operational Programme please visit www.pois.gov.pl. For more information about the project please click on this link.

The renovation and conservation of the Pump House and its environs