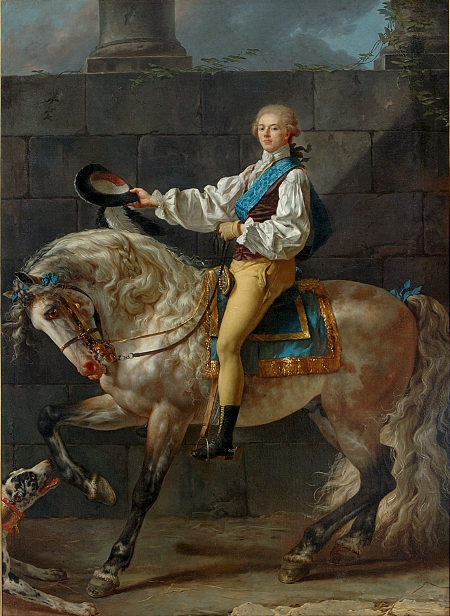 The most valuable item in the whole iconography of Stanisław Kostka Potocki is unquestionably the masterpiece by Jacques–Louis David (1748–1825), kept at the Museum Palace in Wilanów and discovered in the Wilanów collections catalogue from 1834 (as no.1): “Natural size equestrian portrait of Count Stanisław Potocki (...) taken from a sketch executed in a manège in Naples, prepared and put on display at a fine arts show in Paris in 1781, regarded as one of David’s best works”. This reliable description, written upon the basis of information provided by Aleksander Potocki, the son of the sitter, negates the account by Jules David, the grandson of the great painter, according to which the young Stanisław Kostka, taking part in a hunt organised by the king of Naples, supposedly tamed a magnificent wild steed.

The David canvas, owing to the untrue legend surrounding it and the topic of multiple writings, must have been preceded by many preparatory sketches, since its author always paid great attention to a careful finish of his works.  We know about a black and white crayon drawing on blue paper, which appeared for the first time at an anniversary exhibition held in Brussels in 1926. It came from the collection of Maurice Delacre of Ghent and in 1949 was sold together with the whole Delacre collection at an auction held in Berne. This was not a sketch but a drawing-modello, according which it was possible to execute a large composition in oil without the necessity of posing. Another trace of the David canvas was a drawing echoing it in the Wilanów Library collections, described after Andrzej Ryszkiewicz by Krystyna Gutowska–Dudek, the author of a monograph on drawings in the Potocki collections, as a copy from the early nineteenth century. The drawing in question, unsigned, without a date and executed in back and white charcoal on paper, found itself in the Wilanów collection but was not mentioned on its archival lists. Here, Potocki’s facial features are more realistic and not idealised, while the order sash lies across the right shoulder (in the painting – the left shoulder).

The work by David was twice replicated also in graphic art, although without greater success. In 1877, S. Ślaski executed a woodcut upon the basis of a drawing by Jan Zdzisław Konopacki, contained in Willanów. Album by Hipolit Skimborowicz and Wojciech Gerson. In 1880, the above mentioned Jules David executed an equally failed aquaforte, possibly modelled on a rather inferior engraving and illustrating a second volume of his monograph: Le Peintre Louis David 1748 – 1825. Souvenirs et documents inédit (Paris 1880). Let us add that the equestrian portrait, typical for the Baroque imagination, was at the time of David almost an anachronism and that genuine courage was required to propose such a composition.