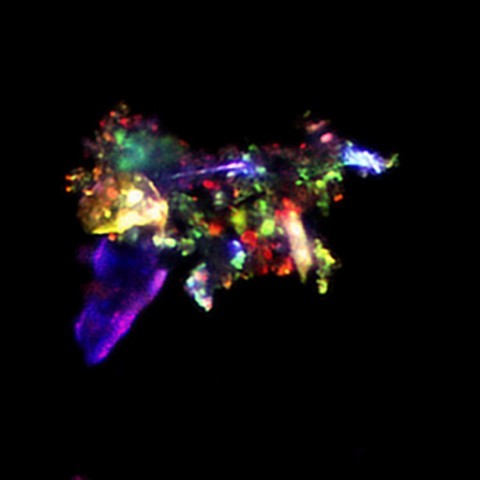 A piece of dust under the microscope, photo by A. Leśkiewicz-Laudy

Research into biological succession and bio-deterioration processes in visualisation analyses of isolated biofilms, and their identification

The research involved the level of biological succession of the Northern Pergola. This historic building is located at the extension of the northern wing of the Palace and it closes the Palace courtyard from the north. The research involved observations of the surface of stone pergolas, whose condition differs significantly depending on the direction. The research included observation fields in the northern and southern parts of the pergolas. During the monitoring of changes in the selected fields it has been observed that they differ depending on the field. Generally, succession starts on the edge of the cleared research field, but lithobionts also appear in the centre, in the form of colonies scattered at various points or occupying large spaces. Lithobionts are live organisms inhabiting the inside and the surface of rocks. They include mainly chemoautotrophic (chemolithotrophic) bacteria, blue-green algae, cyanobacteria, algae, lichenised and non-lichenised fungi and bryophytes.

The major assumption of the research was to assess the level of air dustiness and specifying the types of sediments in the rooms of the Wilanów Palace Museum. Within the dustiness analysis, a series of measurements was performed of five fractions of dustiness of the air in 32 locations within the museum. The research on the level of air dustiness allows a preliminary assessment of hazards to historic buildings on the basis of the quantity and content of the dust. The measurements were made with the use of the DustTrak Monitor 8533 made by TSI. The device measures the following dustiness fractions: PM1; PM2, 5; PM4 PM10 and TOTAL. PM refers to particulate matter, and the digits denote the size of dust grains in µm. “TOTAL” means total dust, i.e. all types of dust with an aerodynamic diameter larger than 10 µm. The interpretation of the results was based on the Regulation of the Minister of Labour and Social Policy of 6 June 2014 on the highest permissible concentration and intensity of agents harmful to health in the working environment (pursuant to Article 228 § 3 of the Act of 26 June 1974 – the Labour Code (Journal of Laws of 1998, No. 21, item 94, as amended).

Spectral microanalysis of the sediments of selected samples

Within the research into sediments, a morphometric and spectral analysis was carried out using a confocal microscope on the basis of specially collected material. Such analyses make it possible to assess the qualitative composition of the precipitating dust particles through observing the phenomenon of autofluorescence.

The purpose of the analysis was to determine the general microbiological biodiversity of the studied objects and the number of cells of live cultivable microorganisms. The research made it possible to specify the number of microorganisms inhabiting the historic wall fabrics earlier and now, and their genetic identification enabled the assessment of possible hazards to the buildings.

Microbiological analyses of the air in historic buildings

The research included the microbiological monitoring of the air in selected locations of historic rooms and museum spaces and in the area of the Northern Pergola using standard methods complying with the air research norms recommended by the Polish Committee for Standardisation. In addition, research and analyses were carried out on specific surfaces adjusted to the locations of the selected buildings. This made it possible to apply the appropriate methodology for isolating groups of bacteria typically inhabiting specific historic surfaces (paper, wood, wall paintings, alabaster). Also, an analysis of the number, diversity and enzymatic activity of bacteria isolated from air samples and samples of objects’ surfaces in selected rooms of the Palace. This has allowed the identification of microorganisms constituting the potential source of infections of exhibits and damage of the museum’s historic collections.

Chemical research and analyses of selected works of art

The objective of the research was to identify organic binding agents, oils, waxes and resins in the samples collected from oil paintings. The application of techniques enabling the separation of sample ingredients, and their identification made it possible to obtain particularly valuable information useful in the conservation and restoration process of historic paintings. The second part of the research included the identification of the natural dyes in samples taken from historic silk fabrics and the progressing processes of colours’ fading were investigated.

The necessary recognition of the conservation-related and biological conditions and carrying out conservation and chemical works including the assessment of the risk of deterioration of selected exhibition rooms were conducted as a part of the “The revitalisation and digitalisation of Wilanów, the only Baroque royal residence in Poland” project. The Project had secured support from the European Regional Development Fund under the Infrastructure and Environment 2007-2013 Operational Programme, Priority XI “Culture and Cultural Heritage”, Activity 11.1. Protecting and maintaining cultural heritage of over-regional importance. In accordance with the adopted Project Implementation Scheme, the investment was completed by 30 September 2015. The total value of the Project: PLN 18 854 348,06. The amount of additional financing: PLN 14 912 881,37 (European Regional Development Fund: PLN 12 675 949,15, and State Budget: PLN 2 236 932,22). For more information on the Infrastructure and Environment Operational Programme please visit www.pois.gov.pl. For more information about the project please click on this link.