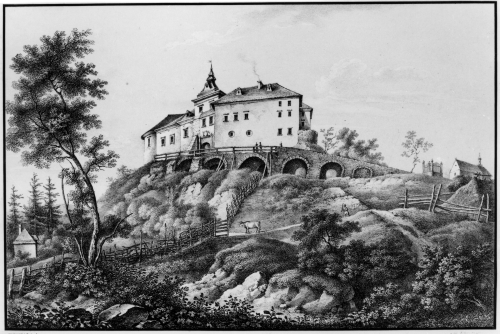 Antoni Lange, based on his own drawing: View of the Olesko castle, from the collection of the National Library in Warsaw.

Olesko was a stronghold settlement in Ruś Halicka [Halych Ruthenia], raised on a single rock surrounded by vast fields, ponds and swamps in a defensive location created by nature itself. The earliest record of Olesko dates back to the times of Kazimierz Wielki [Casimir the Great], more precisely to 1366. The local castle changed its owners with passing centuries. Having married Zofia, daughter of Hetman Stanislaw Żółkiewski, Jan Daniłowicz in 1625 converted the castle to the currently preserved shape, namely an aristocratic residence and a fortress in an oval outline, composed of two parts connected by a tower, with an inner courtyard and a deep well. The castle was accessed by a road on a stone arcade, a drawbridge and an entrance gate situated in a square tower. After the male line of the Daniłowicz family became extinct, the entire huge property was inherited by their daughter Teofila, at that time already married to Jakub Sobieski. Their second son Jan was born on 17 August 1629 in circumstances vividly described by historian Janusz Woliński (1946): “(…) a sever thunderstorm was approaching the lofty Olesko castle; bloody blazes of conflagration kindled by a prowling unit of armed Tatars turned red the massive walls of the aristocratic residence. Amid the torrential rain, the cold flashes of lightening, the whole area was reverberating with moans of people murdered or driven into Turkish captivity, occasionally disrupted by throaty shouts of Tatars from the camp, routed by Polish companies galloping in a violent chase. In the raging elements and the turmoil of war, the future King of Poland Jan Sobieski was born in a quiet, secluded corner of one of the castle rooms sometime between 2 and 3 o’clock in the afternoon”. The legend has it that the baby was placed on a marble table whose top cracked in half (which for some was an omen of the newly born mighty ruler).

Sobieskis’ hearth, the castle suffered greatly in the course of the Cossack and Turkish wars. In 1682 Jan III arrived in Olesko and found both the town and the castle ravaged. Marie Casimire spared no expense to have it renovated. The royal spouses paid another visit to Olesko in 1687; the state of the location was then described by their courtier Franciszek Daleyrac. In 1725 Konstanty Władysław Sobieski sold the Olesko property (and the Podhorce castle) to the Rzewuski family. Hetman Wacław Rzewuski made the Podhorce castle his domicile, to which he transported a lot of movables from Olesko. At the end of the eighteenth century the Olesko residence was nearly in ruins. It was no earlier than in 1883 that it regained attention thanks to the jubilee of the Relief of Vienna.

The presented lithograph, dating back to 1823, represents a view of the Olesko castle and was created – probably on the basis of a drawing from nature made by the same author – by Antoni Lange (died in 1842), a landscape painter, stage designer and printmaker. The composition of a considerable size was impressed in a Lviv-based works of Józef Piller and appeared in the album published by Lange, entitled Zbiór najpiękniejszych i najinteresowniejszych okolic Galicji [Set of the most beautiful and the most interesting areas in Galicia] (Lwów 1823). Lange’s contemporaries acknowledged him above all as a landscape painter, especially of the mountainous areas of Eastern Galicia, which he visited on his numerous artistic excursions.

Antoni Lange, based on his own drawing: View of the Olesko castle, lithograph, 1823.