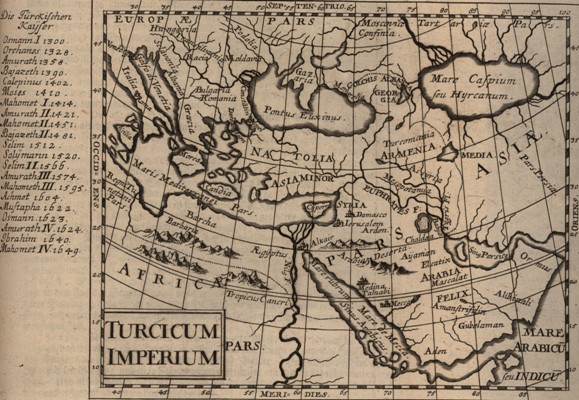 At the end of the 16th century, the hitherto peaceful Polish-Turkish relations definitely enter a new phase. A new wave of Mongol invasions, organized more and more often in retaliation for the Cossack raids on the Sultan’s lands and undertaken without Poland’s knowledge, had to exacerbate the situation. The scale of devastation and loss was much greater than in the previous period. The lingering state of emergency in the borderlands had to trigger a war psychosis, gradually expanding onto the rest of the country, especially as the Turkish threat, losing its local significance, became real for the existence of Poland as a state in the 17th century.

In the 17th century, Sarmatism, formerly consisting mainly in seeking the nobility’s ancient genealogy, was reduced to the apotheosis of fighting against infidels in defence of faith and fatherland, thus forming the stereotype so characteristic for a long time of the whole Polish mentality: a Pole – a Catholic – a soldier. Although the slogan of Poland as a rampart of Christianity emerged as early as the 15th century, it was only in the 17th century that it gained huge popularity within noble society, appearing in diaries, letters, instructions for the deputies, speeches, sermons, etc. Throughout the Commonwealth, soldier's virtues were praised and the obligation to fight against infidels was proclaimed. Turks now became not only pagans, the followers of “lewd” Islam, but also a nation of slaves, which was contrasted with Poles, free people. The Polish envoys to Turkey now insisted on maintaining a dignified posture during audiences with the sultans and viziers, refusing – and often risking their lives – to bow as required, to bend their heads to the ground in front of a Turkish dignitary.

But it was in the 17th century, during the most intense struggle against the Ottoman Empire, that oriental influences reached their apogee in Poland. The elements of Turkish costume, weapons, household effects had appeared in Poland before. However, those were minor borrowings. In the 17th century, the oriental influences were growing stronger and occurred so massively that we can talk about the orientalization of the gentry culture. Xenophobia and Sarmatism cutting off the Poland of that time from Western Europe apparently did not interfere with the nobility’s acceptance of elements of the Middle East’s material culture. The well-developed trade with the East from where fabrics, weapons, carpets, jewellery were imported, contributed to the phenomenon. Also the wars, during which substantial loots were taken, contributed to the multiplication of Eastern goods and products in the homes of the gentry. The condemnation of the influences of French fashion resulted in the emergence of the Polish gentry’s outfit heavily influenced by the Orient, which albeit differing from the original, was very reminiscent of the Turkish outfit due to the fabrics, colours and ornamentation used. Strong Turkish-Tatar influences were also visible in weaponry and the way of warfare which Poles had to adjust to the tactics of their enemy. Those influences resulted in and at the same time were confirmed by a number of linguistic borrowings.

The fascination with the material culture of the East and the Eastern way of warfare, however, did not lead to cultural and social rapprochement. The religious and political differences  resulted in a gap too deep. In the eyes of the 17th-century Polish travellers, the Turks now seemed corrupt, venomous, lewd and lecherous, or at best effeminate individuals, although certain social forms, e.g. Turkish harems, evoked some envy in the Polish nobility. As rumour (disseminated in Poland with great indignation) had it, some magnates (e.g. Jan Sobiepan Zamoyski) even created harems at their courts.

However, with that very different cultural and religious tradition, there did not exist – as it seems – a barrier of rage and hatred between the opponents, even in the years of intensified Polish-Turkish struggle. Overusing the slogan of Poland being the rampart of Christianity, the Polish nobility knew, nevertheless, how to enter into alliances with the followers of Islam if necessary. Tatar troops  served in the Polish army, the so-called Lipka Tatars settled in the territory of the Commonwealth, enjoying privileges and freedoms (including the freedom of religion) in exchange for the duty of military service. When the Swedish army invaded Poland during the Swedish Deluge, King John II Casimir did not hesitate to use the help of the Crimean Khan. Captive Tatars and Turks often settled in Poland, where it was facilitated for them to get accustomed to the realities of life, and where they were treated without hostility. By the end of the 16th century, Kasper Nahaj, a Jesuit and a native Tatar rescued from a defeated Tatar hit-and-run unit as a boy and raised in the Catholic faith, worked in Ukraine. A few days after the Battle of Vienna King John III wrote to his wife that he was sending her a few Vizier’s servants taken captive who wanted to be merchants and to settle in Zhovkva. A Turk captured by a nobleman at Buda became his valet for some time, then he was baptized, and when his master gave him freedom, he went to Gdansk, where he wanted to learn the barber profession. The case dragged on for a long time, but in the end the city council issued a judgment allowing him to settle in the city. Similarly, in the Sultan’s state the so-called “poturczeńcy”, i.e. the Poles who put on turbans, were treated with equal tolerance. They often reached a remarkable status, while not breaking their bonds with Poland and rendering it services. The 17th-century poet Samuel Twardowski lamented it, but not excessively, and he did not deny the converts  honour.

An interesting phenomenon is the coexistence of the slogan of rampart of Christianity with the aversion to war of aggression with Turkey, which was characteristic of the Polish nobility. Preparing war plans against the Sultan, Władysław IV had to keep it in secret from the nobility. Signing pacts and truces with the Turks, except for the Buchach Peace Treaty, satisfied the majority of Sejmiks (local parliaments). An interesting reaction of the Polish military occurred on signing the truce with the Turks at Żurawno in 1676. The Turkish and Tatar troops began to crowd under the fortifications of the Polish camp, declaring their brotherhood and trading with Polish soldiers. That manifestation of spontaneous fraternization on both sides was no doubt typical, as it proved  the absence of hatred among the masses of soldiers, and on the part of the Turks and Tatars also the recognition of the opponent’s bravery. As a result of fierce fights, a kind of mutual admiration and respect began to form, an atmosphere that is generated in the struggle of two chivalrous, brave and loyal adversaries. Sobieski put it best when he wrote after the Khotyn victory in 1673, “such brave people as was the Turkish army, I know that saecula [ages] have never had”.

Perhaps it was such sentiments that facilitated the conversion of recent enemies into allies, which happened in the 18th century. As a consequence of the new political configuration, Turkey became a natural supporter of Poland which was threatened with partitions. Already in the years 1674-1675, during the reign of John III, the Polish-Turkish-Tatar alliance plans against Russia were born, which, however, did not come to fruition. The idea of seeking support in Turkey developed particularly intensely in the second half of the 18th century, initially among the Bar Confederates, then in groups of patriots aiming at reforms. The diplomatic missions sent to Turkey in the years 1773 and 1790 declared mutual friendship and alliances. The new political relations were reflected in an increased wave of interest in the East. It was the East that the Polish writers of the Enlightenment era derived the beginning of sciences and literary creation from. It was no coincidence that the first translations into Polish of the Quran and the “Tales of One Thousand and One Nights”  were then made. The lover and connoisseur of oriental literature Prince Adam Kazimierz Czartoryski not only collected a large library of books and oriental manuscripts, but he also created a dictionary of words adopted from Eastern languages to  Polish. Of great importance was the foundation by King Stanislaus Augustus of the Oriental School in Istanbul aimed to teach languages and knowledge of the country to Poles and other visitors. Among the graduates of the school was Józef Mikosza who wrote a description of Turkey entitled “The Political Observations of the Turkish State”.  In the eyes of an enlightened nobleman of the second half of the 18th century, the East was no longer only a dreadful seat of tyranny and slavery, but also an example of wise state arrangements, idealized in Poland due to the need for models worthy of emulation. The previous fear and hostility in the mental attitudes of the increasingly enlightened nobility are gradually replaced with fascination with the Orient - but of a different type than in the 17th century and the first half of the 18th century. As Maria Bogucka wrote, it was not fascination with colourful fabrics or gorgeously decorated weapons, but intellectual interest and admiration for the achievements of the Oriental art, literature and science. Such attitudes and the belief in military aid from Turkey were passed on to future generations. That was the ground for the legend telling that in the 19th century in any public audience at the Sultan‘s court questions reverberated about the presence of the envoy from Lechistan.