Museum > European Funds > Infrastructure and Environment 2015 > The restoration, reconstruction and the preparation of copies of two vases with swan heads and nods
default size   A-   A+

The restoration, reconstruction and the preparation of copies of two vases with swan heads and nods 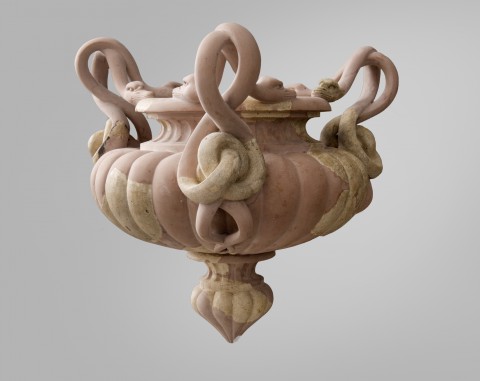 The fragments of two hanging vases with swan heads and nods are archaeological monuments found during excavation research, known only from source materials. It has been established that the vases were brought to Wilanów in the mid-19th century by August Potocki and that they were hanging on the Southern Pergola near the Rose Garden. The restoration and reconstruction work made it possible to acquire new objects for the museum, which is a real attraction, not only for specialists and art historians, but also for all those interested in the history of Wilanów and the museum’s collection.

Fragments of vases, due to their being loosely stored in boxes in an unpresentable way, did not give a true good overall impression of the whole objects. Among the 68 elements it was certainly possible to identify the bellies of the two vessels and two unmatched swan heads, the nods of the ornamented ears, and also two tops. Except for the one located in Germany, the objects belong to the largest set of garden decoration elements made by Brandenburg ceramic workshops.

After the completion of conservation works on the fragments, due to the fragility of the reconstructed ears, the reconstructed vases were put on exhibition on specially prepared plinths in the Sculpture Pavilion by the Rose Garden. Special ceramic copies made on the basis of the original vases were hung in the place of the originals, i.e. on the Southern Pergola in the Rose Garden.

The restoration, reconstruction and the preparation of copies of two vases with swan heads and nods were conducted as a part of the “The revitalisation and digitalisation of Wilanów, the only Baroque royal residence in Poland” project. The Project had secured support from the European Regional Development Fund under the Infrastructure and Environment 2007-2013 Operational Programme, Priority XI “Culture and Cultural Heritage”, Activity 11.1. Protecting and maintaining cultural heritage of over-regional importance. In accordance with the adopted Project Implementation Scheme, the investment was completed by 30 September 2015. The total value of the Project: PLN 18 854 348,06. The amount of additional financing: PLN 14 912 881,37 (European Regional Development Fund: PLN 12 675 949,15, and State Budget: PLN 2 236 932,22). For more information on the Infrastructure and Environment Operational Programme please visit www.pois.gov.pl. For more information about the project please click on this link.

The conservation and restoration of paintings, sculptures and handicraft works from the collections of the Museum of King Jan III's Palace in Wilanów

As part of the "The revitalisation and digitalisation of Wilanów, the only Baroque royal residence in Poland" project we carried …

The renovation and conservation of the Pump House and its environs