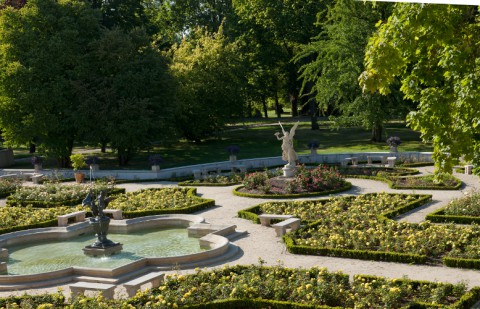 The Rose Garden next to the south wing of the Palace was commissioned by August and Aleksandra Potocki in 1855-1856. The design was prepared by the architect Bolesław Paweł Podczaszyński.  The garden takes the shape of an Italian Renaissance giardino secreto – i.e. a separate garden established within a larger one and divided into small areas planted with flowers and herbs. Situated next to a building wall, a giardino secreto was usually a retreat of quiet repose. Podczaszyński’s design alludes to the Italian parterre next to the 16th century Holland House in London, whose shape and internal layout of beds it replicates. The Wilanów garden is a rectangular parterre with intersecting diagonal and parallel paths. The individual parts  of the giardino are lined with a trimmed box hedge.

The different areas in the garden are filled with roses (Rosa sp.). Visitors can feast their eyes on the wealth of varieties and species of the rose from early summer through late autumn. Most are border roses of different colours, shapes and sizes. There are also climbing roses at the pergola (Dortmund) and the Excelsa ramblers forming large trusses of small, pink flowers. Another noteworthy variety is the old Margo Koster polyantha planted in the area next to the terrace: a rose of great charm, covered with a profusion of salmon pink flowers. In addition to roses, the garden includes other seasonal (spring and summer) plants. In the spring, magnificent tulips give added appeal to the giardino, and in the summer the roses find themselves in the fitting company of heliotropes, dahlias, fuchsias and geraniums.

At the turn of the 19th century, there was a hothouse on the north terrace of the garden, where heat loving plants were removed when the summer was over.

From the east, the garden is bounded by a terrace with iron pergolas at the stairs, covered in climbers: silver lace vine (Polygonum aubertii) and the ornamental vine Vitis coignetiae which turns into amazing shades of fiery gold, red and orange in the autumn. From the south, the garden is separated by a stone wall with flower vases. The garden contains a number of sculptures, including two lions on the terrace of the former hothouse, two dogs next to the side entrance, two flower tripods, two pairs of relief sculptures next  to the terrace entrance and four allegorical statues. There is also a fountain at the centre.

The delightful rose garden provides a perfect setting for open air events. Each summer, classical concerts are organized among blooming roses on the terrace.

In 1799-1821, Stanisław Kostka Potocki and his wife Aleksandra have their Park extended to the north in a then-fashionable English …

The Baroque Garden is the oldest part of the Wilanów Park. It was designed in alignment with the main axis …