The Sobieskis’ Our Lady of Loreto 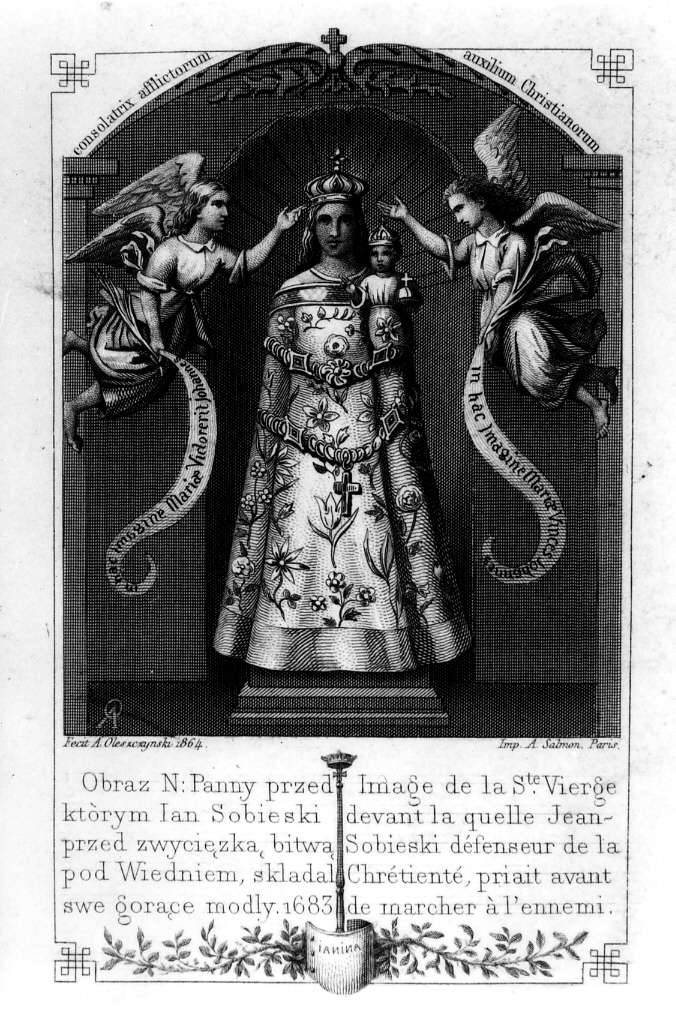 Antoni Oleszczyński, based on a painting from 1600–1650: The Sobieskis’ Our Lady of Loreto, picture from the collection of the National Library in Warsaw.

After the battle of 1683, in the ruins of a castle situated near Vienna and burnt down by the Turks, Crown Grand Hetman Stanisław Jabłonowski found a small oil paining on canvas. It turned out to be a copy of the miraculous statue of Our Lady from 1650–1700, preserved in the Holy House of the Loreto Basilica. Two angels on either side of the statue are holding streamers with the following inscriptions: In hac Imagine Mariae Victor ero Ioannes and In hac Imagine Mariae Vinces Ioannes. Since the royal Sobieski family had been particularly devoted to Our Lady of Loreto, Hetman Jabłonowski immediately offered the find to Jan III. The event was interpreted as miraculous due to its extraordinary circumstances and the content of the inscriptions, associated with the name of Jan Sobieski. The king himself shared the same conviction when reporting the event as it unfolded in his letter to Marie Casimire composed on 17 September 1683: “In a rather miraculous way I gained possession of a certain painting”. The history of the painting was described in 1730 by Prince Jakub Ludwik Sobieski at the request of his daughter Maria Klementyna. The prince’s account was known from two copies held in the Vatican and (until 1939) in the Radziwiłł Archive in Warsaw.

Following Jan III’s return to Poland, the painting of Our Lady of Loreto was piously venerated. The king would take it with him to successive war expeditions and Marie Casimire intended to have it permanently installed in the chapel of Our Lady the Victorious, founded by her as a votive offering in the Warsaw district of Marywil (eventually the plan was not implemented). The icon was stored in royal residences (among others in Żółkiew) and after 1740 it was inherited along all other possessions from the Sobieskis by the Radziwiłłs. From then on it circulated between Nieśwież and Berlin. Restored in 1683 and before 1740, it underwent yet another conservation in 1983 in Cracow at the occasion of the Odsiecz Wiedeńska [The Relief of Vienna] exhibition, staged in the Royal Castle in Wawel. At present is constitutes a private possession.

The image was copied in painting and printing. Worth mentioning among the printed copies is a small-size steel engraving signed by Antoni Oleszczyński (in form of his characteristic tied monogram AO), made in exile in Paris in 1864 and published by A. Salmon. A later example was a woodcut by Bronisław Puc, cut according to a drawing by Stanisław Holc and included in Józef Łoski’s prestigious publication entitled Jan Sobieski, jego rodzina, towarzysze broni i współczesne zabytki [Jan Sobieski, his family, comrades-in-arms, and contemporary monuments] (Warszawa 1883). Poorer than the Paris steel engraving, it is signed only with the initials S. H. and B.P.

A small, charming picture of Our Lady of Loreto bewilders, moves and fascinates. It bewilders through its mysterious history, or more specifically its complete lack of history prior to 1683. It moves because after the quoted date  the icon’s fate permanently interwove with the most powerful defender of Christianity in Europe at the end of the seventeenth century and at the same time the most ardent worshipper of the Madonna of Loreto. It fascinates as the painting has been the topic of countless studies and artistic reproductions.