The unusual history of a unique 17th century Lacquered Shield 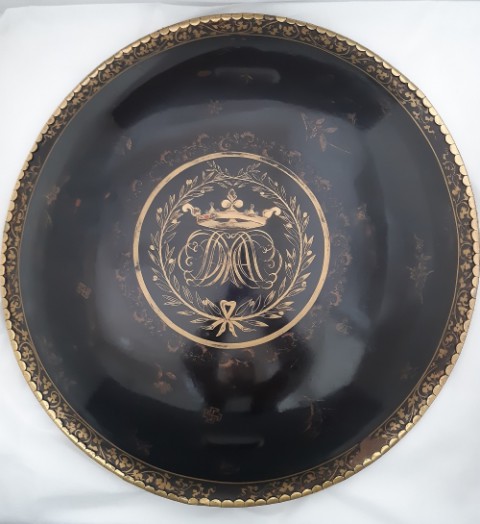 With the works complete, the shield is properly secured in the museum storage, waiting until its place at the exhibition is ready, photo by A. Guzowska

The Conservation of 17th century Lacquered Shield (inv. No Wil. 2648) from the Collection of Museum of King Jan III’s Palace at Wilanów project was carried for almost one year and just ended in March 2020. It was co-financed by the Museum and the Sumitomo Foundation  and it was the second cooperation project between those institutions.

The round shield of 54,0 cm diameter is made of leather, covered on both sides with natural black lacquer, called urushi in Japanese language. The front side is decorated with a central circle with a monogram surmounted by a crown within a laurel wreath. The wreath is surrounded by arabesque motif, the same one as on a narrow border with nashiji[1] background around the perimeter. There are flowering plants and a few geometrical oriental motifs on plain black lacquer on both convex and concave side. The decoration is made using gold and silver maki-e (gold sprinkling) technique although there are quite a lot of elements added later in European lacquer.

Until recently, very little was known about the shield from the collection of Museum of King Jan III’s Palace at Wilanów, Warsaw. It is described as “ampla” (a kind of a lamp) in the Museum storage inventory list. Mounted into a hanging decoration with a mirror, 4 ostrich eggs and colorful cords made of cotton and wool it was used as a ceiling ornament in one of the Chinese rooms at the second floor of the Wilanów Palace, as indicated at the old photographs taken before 1914. The interiors of those Chinese rooms were arranged in the 19th century by Stanisław Kostka Potocki, then the owner of the Residence. This decoration is first mentioned in the inventory from 1832. 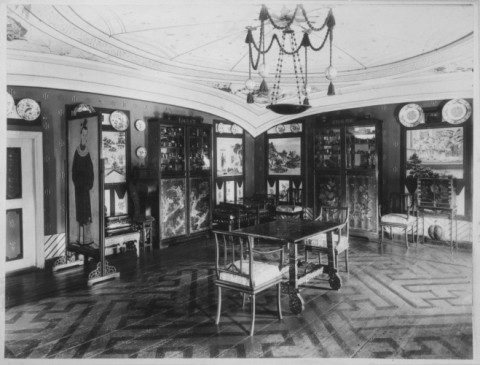 Archival photo from the “Wilanów” album by B. Mieszkowski, before 1914

Recent investigations proved that a lacquered part of this hanging “lamp” originally used to be a leather shield made in the second half of the 17th century, one of few remaining until today in the European collections, and is 200 years older than it was thought.

Leather shields like the one from Wilanów collection were made in Bengal and shipped to Japan for lacquering and re-exporting. They are first mentioned in 1647 in the shipping documents of the Dutch East India Company (Verenigde Oostindische Compagnie, VOC) from Amsterdam. They were usually made of buffalo-hide or Indian rhinoceros hide for the finest pieces. They were not used for battles in Japan but ordered privately by the Commanders (Opperhoofden) in Deshima or other VOC high rank employees as luxury showpieces, meant as regalia at official occasions and later as interior decoration. After re-importation to India some of them received metal fittings and a handle attached by four or six metal bosses near the middle of the shield. Others with European decoration, such as a family coat of arms, a name or a monogram have no handles and there is little information of how they were used by their owners.

Such shields were obviously rare and it is quite astonishing that several have survived. The earliest dateable shield from the Museum of Far Eastern Antiquities, Stockholm, was made for Frederic Coyett, Opperhoofd in Deshima in 1648 and in 1653. There are a few other examples, now in European Museums, including Ashmolean Museum in Oxford, National Museum of Ethnology in Leiden, Kynzvart Castle in Czech Republic, Schloss Pillnitz near Dresden or Rijksmuseum and  the Amsterdam Museum[2]. For sure there are some more pieces in private collections and they appear very rarely at the art market (e.g. one was sold out at the Sotheby’s auction in 2019 for 37,500 GBP).

The Wilanów shield resembles the one from the Rijksmuseum Amsterdam (inv. NG-NM-541), recently attributed to Johan van Leenen who served the VOC at the factory in Hooghly, Bengal, in 1654-1678 and was the Commander in Sumatra in 1679-1685.

They both have a similar monogram surmounted by a crown within a laurel wreath as a central part, although Wilanów piece has richer decoration. The similar monogram but flanked by two stylized palm leaves can be seen on the shield from the private collection presented in Amir Mohtashemi Gallery in London[3]. Yet another trace leads to August the Strong of Saxony who used to be the owner of the Wilanów Palace at the beginning of the 18th century and had the resemble shield in his collection, now in Schloss Pillnitz, Staatliche Kunstsammlungen near Dresden. 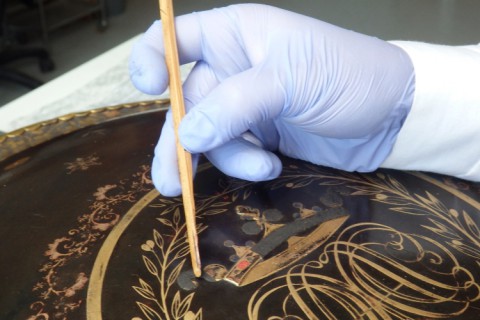 It was decided that the crown should be reconstructed according to the sabi takamakie technique. Once it was polished and covered in lacquer, the shield was finished in the maki-e (gold sprinkling) technique, photo by A. Guzowska. Click on the photo to see more

Although small, this object deserves special attention in the Wilanów collection due to its historical value. It is proof of the fascination of East Asian culture among the owners of aristocratic residences in the 17th century, during the reign of fashion for chinoiserie. Coming from the same period (only a half century younger) as the Nanban table it will complement the exhibition organized after the completion of The Collaborative Project of Conservation of Nanban Table, co-financed by the Sumitomo Foundation in years 2017-2018.

Conservation process was planned for 1 year. The current state of the object did not allow for exhibitions without conservation intervention. There was a fear that unstable lacquer flakes would fall off and the blisters and spitting of secondary resin varnish, which covered both sides of the shield would deepen. The conservation was carried out by a Polish conservator but using traditional Japanese methods and materials.

The aim of conservation was to restore the original appearance of the object as much as possible, taking into account historical secondary additions, and to preserve it for the future generations. On the occasion of the conservation, detailed analysis of this extraordinary artefact was carried out. They gave more insight into the techniques and technology of production, early conservations and the history of the object.

As in the case of the Nanban Table Project, the shield conservation was conducted at Museum of King Jan III’s Palace at Wilanów in a special “showroom”, with a glass wall to enable the visitors of the Museum observe the work progress.

During conservation European varnishes added in the past conservations were removed, revealing well preserved surface of original black lacquer with a whole range of colors associated with natural age-related patina - from light brown and red reflections to dark brown and black shades. The biggest challenge, partially impossible to complete, was to wash away traces of insect droppings hidden under the resin varnishes without destroying floral ornaments not resistant to solvents.

Two holes in the shield were discovered during cleaning under one of flowers, which were probably originally used to hang the shield on the wall. Similar holes in other shields from the same period seem to support this thesis.

Unstable lacquer flakes were adhered using mugiurushi glue[3] which is much stronger but at the same time more flexible than cow hide glue. The losses in lacquer film were filled with kokuso putty[5] and smoothened with sabi[6]. Color was adjusted with a mixture of fresh lacquer and soot to harmonize with the surrounding. At the end the whole urushi surface was reinforced in urushigatame[7] process, during which mixture consisting of raw lacquer, nashiji (orange color lacquer) and transparent kijiro lacquer was applied except areas of later added design.

The past restorations and retouches of decorations, mainly in the central part, were removed in order to keep the original atmosphere of the object. Partial reconstruction of the crown was done using maki-e technique, with natural black and red lacquer and fine gold powder.

The shield will be displayed individually, in accordance with its original purpose, in a special case accompanying a new exhibition at Chinese Cabinets – restoring the memory of the collections of Stanisław Kostka Potocki and his descendants. In the future, the Wilanów Museum plans to make a copy of the object and place it in the hanging decorative ornament instead of the shield and possibly expose it according to the appearance of the Palace interior in the 19th century. We only know a few details about the history of the shield, but even these are extraordinary.

[1] Nashiji – decoration technique, which resembles a Japanese pear skin, hence the name. Made with silver particles on a black background covered by orange color lacquer

[6] Sabi – a paste like mixture of fine soil, water and raw urushi

Conservation of a unique Nanban table from the Wilanów collection (article, Konserwacja)

Thanks to the financial support from the Japanese Sumitomo Foundation and cooperation between the Museum of King Jan III’s Palace at Wilanów with outstanding experts in Asian lacquer, it was possible to take the conservation works of the Nanban style seventeenth-century table in the Wilanów collection. It was one of the first conservation projects involving both Japanese and European specialists. It was part of cooperation started in the 1990s and involving science and conservation, between Japan and world institutions that keep in their collections artworks decorated with Oriental lacquer – unique witnesses of early modern contacts between East and West. Owing to exchange of experience and expertise, a strategy for the preservation of those very fragile Oriental artefacts has been devised.

Nanban, or the “art of the southern barbarians”, denotes sixteenth- and seventeenth-century Japanese works of decorative art, reflecting a discernible …

In 2019, a new exhibition commemorating the collector's passions of Stanisław Kostka Potocki and his descendants was opened at the …

Visitors to the Wilanów Palace can admire newly renovated Chinese and Hunter’s Rooms. The 19th-c. rooms, located in the right wing of the Palace, underwent conservation and restoration works, as part of a 3-year-long project entitled ‘Restoring the interiors of the Wilanów Palace Museum – the very first museum of fine arts in Poland’.