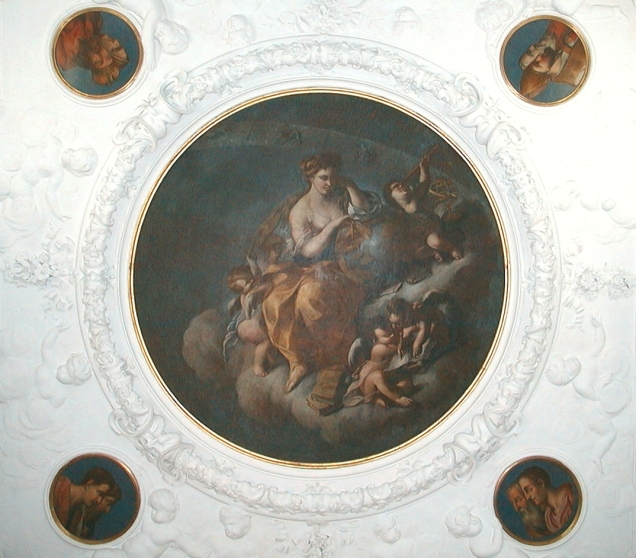 Philosophy, a tondo from the King’s Library in the Wilanów Palace painted by Claude Callot? in the 1680s.

Tito Livio Burattini (1617–1681), a vineyard leaseholder, architect, inventor, geographer, and Egyptologist. He was born to a noble family settled in the Belluno province in North Italy. From 1637 he stayed in Egypt where he drew up a precise map of the country and cooperated with the English archaeologist John Greaves, exploring the interiors of pyramids in Gizeh. He came to Poland in 1641. In 1648 he demonstrated in Warsaw an aeroplane model and in 1650 he was nominated the court architect to King Jan Kazimierz and supervised the construction of the king’s new palace in Krakowskie Przedmieście Street in Warsaw. In the time of the Swedish Deluge Burattini began diplomatic activity and as an envoy he travelled twice (1655–1657) to Ferdinando II, Grand Duke of Tuscany. He lent to the Commonwealth the sum of 60 thousand zlotys for war purposes and together with his brother Filippo took part in war activities, for which he was ennobled in 1658. On 1 May 1658 Burattini leased the crown vineyard in Cracow and in November of the same year he opened a mint in Ujazdów, which struck small copper coins referred to as borattines. The production of the coins triggered a violent campaign against the mint owner; he was accused of making huge profits from the mint operation (40 % of the coin value) and of adding glass to the coins which made them brittle. In 1662 Burattini was brought to the Treasury Commission which however found him innocent and consented to prolong the lease. Apart from the mint in Ujazdów, Burattini opened another mint in Brest-Litovsk. Its operation was suspended by a resolution passed by the 1668 convocation of sejm in Warsaw, which closed all mints in Poland. Burattini faced new charges of abuse and bribery in favour of the candidacy of Prince de Condé, but he managed to refute them. In order to pay back the enormous debt (circa 1.5 million zlotys) due to Burattini by the Polish state, in 1678 he was appointed administrator of silver mint in Cracow. From the mid-1660s Burattini resumed scientific activity and focused mainly on such problems as floods of the Nile, polishing of lenses, measurement of the meridians, and the universal measurement determined by the length of a seconds pendulum. He stayed in friendly relations with Jan III Sobieski and Johannes Hevelius. Burattini died on 17 November 1681.