Virgil’s The Georgics – a source of quotations in Wilanów 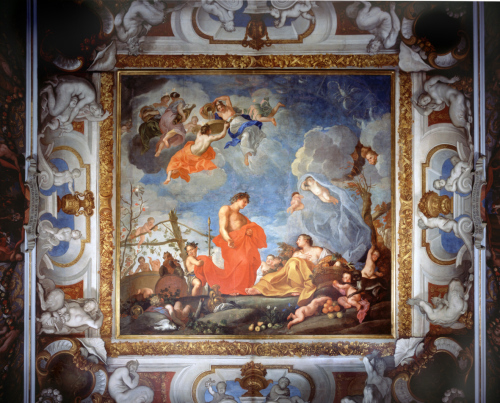 The four books of The Georgics are about the cultivation of land, orchards, animal husbandry and beekeeping. The poet described all the occupations of the farmer in accordance with the calendar and the order imposed by Nature. The outfitting in the residence of Jan III, especially in the private apartments of the king and queen (bedrooms, antechambers), features numerous citations from Virgil’s poem. After all, the Latin motto above the palace entrance says: Quod vetus Urbs coluit nunc nova villa tenet.  The virtue that the poet described as amor terrae was specially cultivated in Rome.

In the royal bedchambers, below large plafonds – Spring in the queen’s bedroom and Summer in the king’s chamber - we come across small paintings illustrating quotations from The Georgics. Virgil’s poem appeared to link not only these two interiors but also the adjoining royal antechambers. In the queen’s room, below the goddess Flora scattering flowers, the paintings show Nature awakening: the birth of a bees’ swarm, a bullfight, springtime work on the land: tilling the soil and grafting  trees. Warm and sunny summer rules in the king’s chamber, with Apollo-Helios on the plafond, watching honey being gathered, goats being shorn, horses, and harvest festival dances. Each painting is an illustration of a chosen fragment of Virgil’s text. The selected quotations praise work on the land and the nobleman-farmer, and stress the connection between royal and Roman virtues. In the queen’s bedchamber the inscription below a tondo showing the grafting of trees reads: exit ad caelum ramis felicibus arbos, miratastque nouas frondes et non sua poma  (G.II, 80-81). The palace residents knew well that the cited fragment illustrates the effect of the labour earlier described by the poet, conveying the effort required during springtime cultivation and the grafting of trees so that they would blossom and become verdant, as if astonished by their beauty.

Below the tondo depicting the naissance of a bees’ swarm we read: ante novas rubeant quam prata coloribus, ante garrula quam tignis nidum suspendat hirundo (G.IV, 306-307). This fragment becomes more understandable if we reach for Virgil’s text, in which the two verses are the crowning of a description of the revival of a swarm. All the operations to be carried out by the beekeeper should take place at a suitable time. Hence the directive contained in the citation – before the meadows blush with new colours and the garrulous swallow hangs its nest underneath the roof.

The king’s bedchamber features a painted depiction of an apiary and beekeepers on a summer day. Virgil offered directives on how to act in a situation when a swarm abandons the apiary. The beekeeper, calm, collected and familiar with assorted ways of tempting the bees, soothes the commotion: Hi motes animorum atque haec certamina tanta pulveris exigui iactu compressa quiescent (G. IV, 86-87). The text tells how a rebellious swarm may be pacified by sprinkling the site intended for the hives with crushed fragrant herbs. King Jan was the owner of apiaries on his estates and was certainly well acquainted with the methods described by Virgil.

The queen’s antechamber is ruled by hearty autumn. From the plafond painted by Siemiginowski we are watched by Vertumnus – the god of change, maturing and harvests, and Pomona – the goddess of plenty, who according to the Roman myth always appeared together. The quotations from The Georgics were selected appropriately for the season: the harvesting of honey, ploughing, the gathering of grapes. In book II, the poet teaches the farmer ploughing his fields in the autumn how to recognise which soil is suitable for a given crop: rara sit an supra morem si densa requires (altera frumentis quoniam fauet, altera Baccho) (G. II, 227-228). Once again, in book II we encounter the citation painted in the queen’s antechamber under a to-do illustrating a honey harvest: dulcia mella premes, nec tantum dulcia, quantumet liquida et durum Bacchi domitura saporem (G. I, 102-103).

The grand plafond in the king’s antechamber is the realm of Winter. The god Aeolus calms rebellious winds in the manner of a severe ruler. Tranquil winter is a time for leisure and entertainment, but also for readying tools for springtime tasks. The tondo illustrations show scenes with farmers resting in their homesteads, shearing sheep, hunting, or, after the grape harvest, celebrating Bacchus. Tum uariae uenere artes. labor omnia uicit improbus et duris urgens in rebus egestas (G. I, 145–146) is the quotation below a tondo depicting farmers repairing their tools around a fireplace. It is this fragment that contains the poet’s probably most important message: labour conquers all - labor omnia vincit.  Earlier, Virgil wrote in The Bucolics: Amor omnia vincit et nos cedamus Amori (E. 10, 69). In a later poem about agriculture love helps to overcome all obstacles and is a source of strength. The motto – Labor omnia vincit - combined with Tantus amor terrae – explains the reason why Virgil’s text was used as a source of citations in the Wilanów residence.