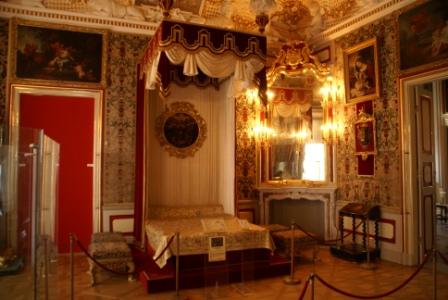 In April 1662 Maria Kazimiera Zamoyska set out for Paris, 'to improve her health and to see her parents', where her husband Jan Zamoyski was to join her. Bad chroniclers did not idle. Joachim Jerlicz ironically wrote in his diary on 7th May: 'At that time, her grace lady Zamoyska – the governor's wife, having taken bad advice and followed mischievous thoughts, without the permission of her husband, took her goods, treasures, gold, silver, jewellery and money of 70 000, persuaded an older servant and a dozen or so other young ones to follow her and left for France – her homeland in the absence of her husband, who was enjoying himself at a parliamentary seating in Warsaw. It would have been better to get married at home to a Polish noblewoman, it would have been healthier and more useful any such libertine one, to take such wife!”.

The French wife of libertine Zamoyski settled in Paris and bought, among others, a proper bed. On 22nd June she wrote to Sobieski: 'I also bought a bed with a baldachin of crimson damask [...] I only miss a bed with velvet baldachin for winter, if I was to spend it here, as damask is only appropriate for spring and autumn.' We can learn what purposes this piece of furniture was used for, from a letter by Jarocki, who accompanied Zamoyska, written two days later to the governor of Zamosc: 'Many noble people have visited her grace. First it was prince palatine. She received them lying on her bed, as if of ill health playing with her medicines, and all this looked very good indeed'.

When Queen Mary came back from Paris, she received in the same manner, the marshal of her husband’s court Mikolai Podlodowski and his courtier Hieronim Zaboklicki in Zamość. This unusual visit from 11th November is mentioned in the diary of an appalled professor of the Zamosc Academy Bazyli Rudomicz: 'I have spoken to the gentleman Mr Ensign of Braclaw [Hieronim Zaboklicki] about Mr Dubski. He said for fun: 'I am going to kiss the feet, that is to greet her majesty [Mary Zamojska]', who – as he said – listened to his highness Mr District Chancellor of Radom [Mikolai Podlodowski], lying in bed. even more so, that it is in good taste to greet a woman in such manner'. As a refined teacher used to coping with audience of little intelligence, he adds to remove all doubts: 'It is an example of a courtly joke'.

The custom watched in Paris was cultivated by the queen till the end of her life. At the beginning of 1696 she was making a reproach to her husband, that, tired of his sickness, he did not want to carry his granddaughter during dinner: 'Your grace, you are similar to the Treasurer of Grand Duchy of Lithuania [Benedykt Pawl Sapieha], when he sometimes visits me when I am in bed. When he sees the child I ask him to take it and he replies he is reluctant to play with children. Sapieha's dislike of small children is of lesser importance here. What matters is the shape and character of a courtly visit, received by the queen in her bed.

Receiving guest in in bed, ridiculed by the courtiers of Zamoyski, was by no means an extravagance of the Queen Mary. Mary Kazimiera was simply trying to keep up with the latest social fashion. The custom of receiving guests by the hostess in bed was introduced by the marquise of Catherine de Rambouillet, in the most famous literary salon of the age. Her 'Blue Room” (chambrebleu) in Hotel de Rambouillet in Saint-Thomas du Louvre gathered all the best people. Here the new style was created, which became the distinguishing sign of the French baroque: precieux. The sickly hostess used to receive her guests in bed. This custom was named la ruelle, from the name of space zone between the side of a bed and the wall, where chairs for guest were situated, so that they could entertain the hostess of the house and the moderator of scientific conversations. The trendsetting glow of the salon quickly changed snobbery into fashion. Every modern hostess wanted to follow the marquise and show. that in spite of her frailty, she is trying with all her will to deal with duties of a hostess. Indeed, there is no better way to attract attention and raise questions about frail condition and poor health!

The newfangled whim did not delight Sobieski. In one of his letters sent from the army camp, we can find a reproach seemingly not directed to the Queen Mary, but strangely referring to her habits:

If people had not to die in wars, suffer from hunger, and lose their health, then war would be the same as peace, and no one would be thinking here of balls, ballets, comedies, cadeaux, ruels etc. But God wanted these things separated, and sorted people for these matters, earthly plaisir for some, and eternal fame for others' The habit of 'ruel' was equalled to other terrestrial pleasures, so common among fashionable ladies of XVII century. The hard Sarmatian had no doubt, that bed should be a place of sleep and frolic, and official social life should be led outside the bedroom.