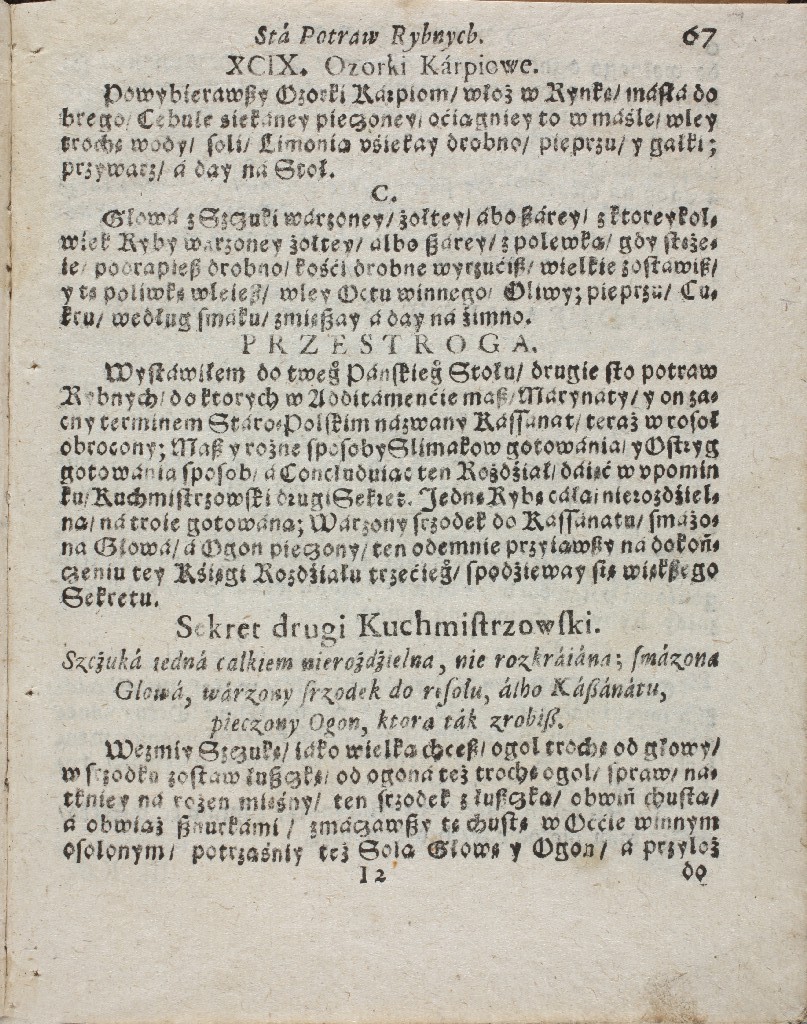 Page from Compendium ferculorum published in 1682; The Library of Polish Academy of Sciences i Kórnik

In the Pan Tadeusz poem, a special place is occupied by a Baroque recipe for pike, which was the main element of the feast that ended the plot of the poem. The pike, called simply the fish by Mickiewicz, was partly roasted, partly fried and partly boiled.
And finally the culinary secret: the fish is not cut,
The head fried, the middle roasted,
And the tail stewed and served with sauce.
(XII, 152-154)

The recipe for Pike, whole, undivided, not cut, fried head, middle boiled in broth or vinegar marinade, roasted tail, is one of the most important recipes by Stanisław Czerniecki, the author of the first Polish cookbook from 1682. Czerniecki was particularly proud of it and presented it as the last recipe in the second chapter of his book (with fish dishes) and at the same time a chef's secret. Although Mickiewicz made Wojski use the Perfect cook by Wojciech Wielądko (first published in 1783), other details contained in Pan Tadeusz, a note in the Poet's Explanations and the recipe itself leave it beyond doubt that the recipe was in fact tact taken from Czerniecki's book. Despite what is sometimes claimed in an attempt to justify Mickiewicz's lack of consequence, Wielądko did not repeat the recipe in his book.

This is due to the fact that the two currently forgotten monuments of the old Polish culinary art are completely different. Czerniecki's book was of a Baroque and national nature, whereas the author of the Perfect cook took pride in using many French recipes from late 18th century. In Wielądko's classical, quiet cuisine that appreciated natural flavours and colours, there was just simply no room for Baroque concepts whose main purpose was to surprise and even shock feasters.

Czerniecki's Baroque concept consisted in confronting feasters with a seemingly unsolvable puzzle: how to prepare a large fish as a whole so that it is partly baked, partly roasted and partly fried? The solution was relatively easy, although laborious. When roasting a pike on a skewer, one part had to be sprinkled with oil and flour, another part wrapped in a cloth and sprinkled with salted wine vinegar, and yet another, the one to be actually roasted, sprinkled with fat by the end of roasting.

However, the tastes and sensitivity of the feasters from Soplicowo were closer to Wielądko's classical cuisine than to Czerniecki's Baroques secrets.
Guests neither asked about the name of the dish,
Nor were they interested in the curious secret:
They ate fast with soldierly appetite,
Filling their glasses abundantly with wine.