Astrea and Celadon, or the Letters of Jan Sobieski and Marysieńka

Astrea and Celadon, or the Letters of Jan Sobieski and Marysieńka Hanna Widacka 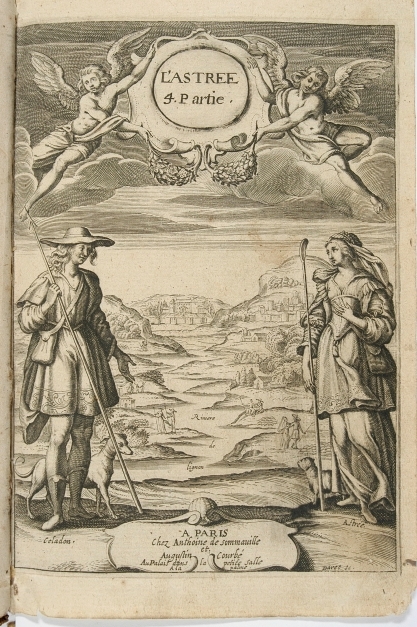 Title page, Celadon, Astrea, illustrations to the book by Honoriusz d'Urfe, 1632, picture from the collection of the National Library in Warsaw

In August and September, Jan Sobieski, the great standard-bearer of the Crown, was passionately devouring French romances. He eagerly read Astrea, the greatly popular shepherd romance by Honorius d’Urfé (Paris 1632), lent to him by Maria Kazimiera Zamoyska from the library of her husband. Sobieski was captivated by the fate of the aloof shepherdess Astrea and her sentimental lover Celadon as well as the story of a dozen other couples populating Forez – a land in the south of France, where the plot of the novel transpired on hundreds of pages in five thick volumes.

The impact of Astrea – a veritable breviary of the prefect courtier, instilling courtesy and discretion, holding in high esteem elegance and convention in speech and conduct, teaching the art of correspondence, etc. – upon the life of Lady Zamoyska’s friend proved to be quite considerable. It was precisely under the spell of the d’Urfé romance that the standard-bearer, who intended to purchase a landed estate in France, insisted in particular on Provence, since it was located near... the land of Forez. Nothing came of these plans, but familiarity with Astrea  yielded quite another outcome: according to the code of the Forez shepherds, perfect love, based on mutual acquaintance, advised the lovers to consider in depth the state of their emotions in conversation, and better still, in correspondence.

In this manner, the heretofore letters written by Sobieski to the young Zamoyska started to assume a different shape. By slowly becoming a sui generis ritual of the cult of the beloved and only woman (especially in the wake of the Carmelitan vows taken in the autumn of 1661) they contained a detailed analysis of the author’s passion and that of his addressee. The lovers, fearing disclosure, accepted in their correspondence – on a scale wider than before – a social cipher making it difficult for an outsider to learn the contents. The code consisted of the use of numerous pseudonyms (some borrowed from Astrea) referring both to persons and concepts. The main protagonists of the letters - Jan Sobieski and Maria Kazimiera – described themselves as: Beaulieu, Celadon, Autumn, Gunpowder, Orondat and Silvander and as Astrea, Essence, Dawn, Cleopatra, Rose and Countess Soissons. The letters became known as confitures or fruit, love - as oranges, and health – as aroma. The surrounding of both authors (the court and the family) was given amusing and, at times, malicious pseudonyms. Such harsh treatment was applied especially in the case of Jan Zamoyski (described as Dossier, Fountain, Fool, Horse, Mackerel), his haughty sister, Gryzelda Wiśniowiecka (Double Bass, Baking Tin) and even their servants (Thorns, Ropes). Seabirds signified the parents of Maria Kazimiera, Playing Ground was the Warsaw court, and Enchanted Palace was Versailles and Paris. Unfortunately, many pseudonyms remained un-deciphered and we shall probably never find out the identity of: Sponge, Apple, Knee, Crocodile, Potty, Slipper or Hunting Hounds. One thing is certain - the corresponding couple had a sense of humour.