Carlo Mauritio Vota, a Double Agent at the Court of Jan III Sobieski 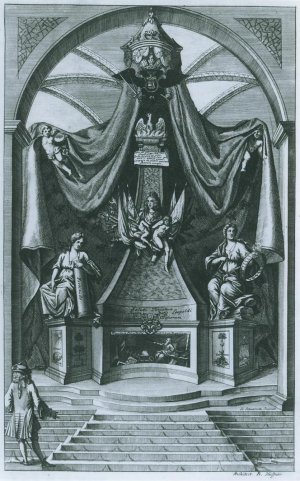 Allegorical composition in honour of Leopold I Habsburg, a 17th-century German copperplate engraving. Print from the National Library collection

The Italian Jesuit from Sabaudia Carlo Mauritio Vota appeared at the court of Jan III Sobieski in 1684, i.e. a year after the Victory of Vienna. An exceptionally skilful diplomat, courtier and scholar, easy-going, gifted with an extraordinary memory and versatile erudition, refined and tactful in discussions, showed up at the Polish court by no coincidence. Since Vota represented confidential interests of both Emperor Leopold I Habsburg and Pope Innocent XI, in a way he functioned as an unofficial double agent. He stopped over at Jaworów, only seemingly by chance, on his way back from Moscow, where he was the pope’s envoy to the young tsars Ivan and Peter. He was quick to gain Sobieski’s trust and liking and was soon nominated the king’s court confessor and royal clergyman. From 1685 Vota was also the tutor of the young princes Aleksander and Konstanty.

Well acquainted with ancient, especially Latin literature, Jan III enjoyed to hold long, scientific disputes with the intelligent Jesuit who, in the words of Julian Bartoszewicz, “in order to please the king, stayed awake often the entire night waiting in Sobieski’s antechamber ready for his possible call to a hold a talk.” Realizing Vota’s successful activity, Leopold I appointed the Jesuit his envoy to King Sobieski. Thanks to his diplomatic skills, on a few occasions Vota was sent to Vienna, Rome and Naples as the Polish monarch’s envoy. In reality however, he eagerly looked after the interests of the Holy League and did so by skilfully counteracting all influence of the pro-French party active at the court. We lack detailed information on his behind-the scenes dealings. The fact remains that Vota gradually strengthened his position by assuming successive functions of the secretary general, a secret advisor and nearly the state minister. On daily basis Vota was simply indispensable to Jan III. The memoirist Kazimierz Sarnecki mentions Vota a few times, e.g. on 4 December 1693, when he notes that, “After the dinner Reverend Vota arrived bringing with him 8 Neapolitan mares, various copperplate engravings, items of architecture and paintings of cities as well as paintings of people mostly nude, pudendas res; later he entertained His Highness with a diversified discourse and relations pertaining to the Roman state.”

Following Sobieski’s death Vota stayed in the Commonwealth retaining his dignity of the royal confessor, this time to Augustus II. He devised a scheme against Andrzej Chryzostom Załuski who openly accused the Jesuit of his imprisonment in 1705 on the Vettin’s order. At the same time, Załuski himself appreciated Vota’s oratorical skills claiming that the latter was never short of words or topics for debate. His entire written output, “autographa et scripta”, collected in a castle chamber was regrettably consumed by fire during the 1690 sejm sitting. Consequently, none of Vota’s written work or portraits have been preserved to this day.