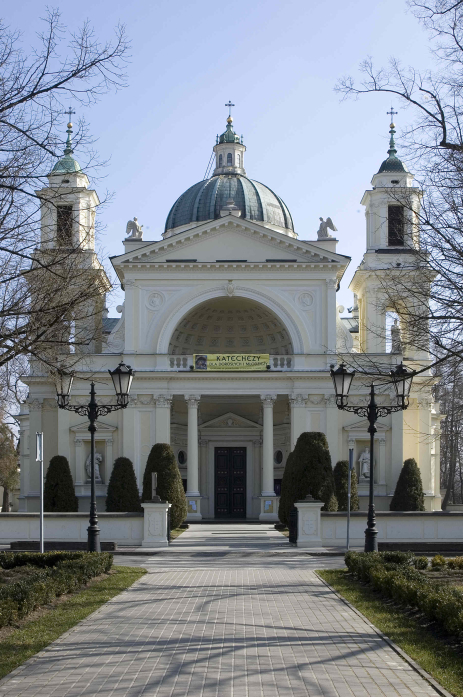 Enrico Marconi (1792–1863 ) came to Poland employed by general Ludwik Pac in order to complete works on his palace located in Dowspuda near Suwałki. Since he had a successful career as an architect in the Kingdom of Poland, Marconi never returned to Italy and only visited his native country in 1857. Following the Dowspuda palace project he took up political activity in Congress Poland. At first he was a construction adviser, later he joined the ranks of the General Construction Board, part of the Governmental Committee for Home Affairs and Public Edification Council of the Kingdom of Poland. In 1824 he lectured at the School of Road and Bridge Engineering at the University of Warsaw and in 1851–1858 at the Warsaw-based School of Fine Arts. Marconi fought in the November Uprising and during the 1863 January Uprising he made a contribution of 1 thousand roubles in silver to the national treasury. In 1836 he designed the mausoleum of Aleksandra and Stanisław Kostka Potocki in Wilanów, converted the palace library and chapel and also made a project of converting Saint Anne’s Church. In 1845 he was commissioned by August and Aleksandra Potocki to convert the former Wilanów manège into Saint Alexander Hospital. As an architect Marconi was mainly active in Warsaw where he was commissioned among others by general Pac to convert the Radziwiłł Palace at 15 Miodowa Street. Marconi executed other projects in the capital city, e.g. he designed the Branicki Palace at 18, Nowy Świat Street and Hotel Europejski at 13, Krakowskie Przedmieście Street. From 1852 he supervised the construction of water supply system, Saint Charles Borromeo Church at Chłodna Street and All Saints Church at Grzybowski Square. Marconi is considered one of the most outstanding architects active in the mid-19th century Poland.