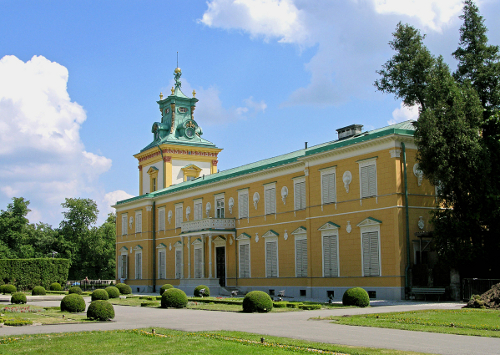 Francesco Maria Lanci (1799–1875) came to Poland in 1825 at the invitation of Stanisław Małachowski. Having recently graduated from his studies in Rome, Lanci was already at the time a promising Italian architect. He worked in Cracow, Galicia and Poznań and managed to make himself famous by the time he arrived in Warsaw in 1844. For 10 successive years from 1845 Lanci was employed by August Potocki, the then owner of the Wilanów property, executing various conversion and expansion works at the palace complex. He altered the existing communication layout of the garden, raised some new functional buildings, converted inter alia bridges and gates, added a garden elevation in the north wing of the palace (applying architectural elements typical of Italian Renaissance) destined to house a paintings gallery and also converted the existing outbuildings. In locations forming part of the Wilanów estate Lanci converted the church in Służew, designed the administrator’s house in Osieck, the orangery and the little palace in Natolin. In 1852–1855 he was in charge of the construction works on the palace in Międzyrzec Podlaski. On the Potocki family’s commission Lanci also converted into a neo-Renaissance style their palace at 17, Krakowskie Przedmieście Street in Warsaw and their palace in Krzeszowice.