History of the museum 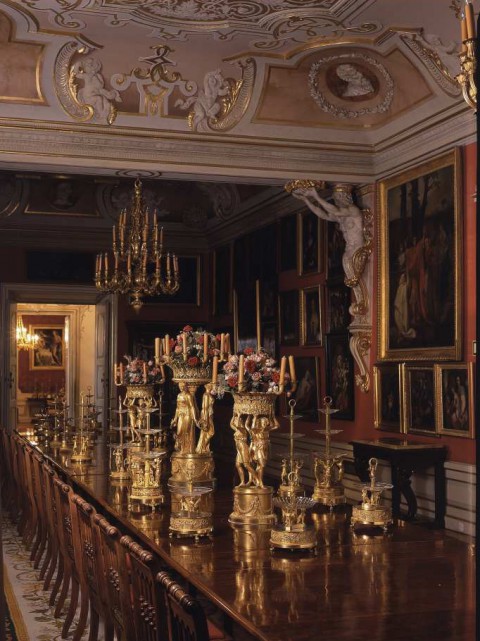 The museum at the Wilanów palace is the oldest Polish museum of art. It was established in 1805, on the initiative of the then-current owners of the palace, Aleksandra Potocka and Stanisław Kostka Potocki. Subsequent owners, members of the Potocki and Branicki families, maintained continuous public access to art collections at Wilanów. In 1877, the museum was popularised with the publication of Wilanów. Album widoków i pamiątek (Wilanów: An Album of Vistas and Remembrances), a book by Hipolit Skimbrowicz and Wojciech Gerson. The year 1893, on the other hand, saw the publication of a guide to the palace at Wilanów and its art collection.

After World War II, due to the agrarian reform, the Wilanów property was claimed by the state. From the late 1940’s until the mid-1950’s, collections previously taken to Germany, Austria and the Soviet Union were retrieved. In 1954, widespread revitalising works began in the palace and in the park. It was decided that all alterations should relate to the aesthetics of the times of Jan III and Baroque decorations, wherever possible. The grand opening of the Wilanów palace – as a division of the National Museum in Warsaw – took place on September 10th, 1962; two days later, on the anniversary of the Battle of Vienna, the Palace was opened for the public. In the 1970’s, the number of visitors to the palace and gardens at Wilanów reached 400,000 a year. In 1983, to mark the 300th anniversary of the Battle of Vienna, the museum organised a jubilee exhibition, “Glory and Fame of Jan III in Art and Literature.”

In 1995, the Museum Palace in Wilanów was separated from the National Museum and placed under direct control of the Ministry of Culture and National Heritage. A year later, the 300th anniversary of the death of Jan III was commemorated with the exhibition “The Throne of Remembrances.” Since early 21st century, both the façades and interiors of the palace, as well as the park and forefield, became subject of extensive revitalisation works. Most of the works were financed with funds supplied by the European Union and the Ministry of Culture and National Heritage. Since 2006, the Museum Palace in Wilanów is a member of ARRE – the Association of European Royal Residences.

The Museum regularly organises temporary exhibitions, conferences and scientific seminars, conducts scientific research, publishes scientific and popular books, and offers teaching in both cultural and natural values of the Wilanów residence. The Museum’s vortal, an extensive repository of knowledge and educational resources, contains several thousand articles describing in detail the history and culture of the Polish-Lithuanian Commonwealth. The Museum also introduces new technologies that enhance the visitors’ experience. The number of visitors to the Palace exceeds 300,000 a year, while the vortal of the Museum is visited by over 700,000 people, and the courtyard, forefield, and the gardens boast a million guests every year.

In September 2013, the Museum changed its name to the Museum of King Jan III’s Palace at Wilanów.

For many years, the Museum was headed by Dr. Wojciech Fijałkowski. Since 2002, this function is performed by Paweł Jaskanis.