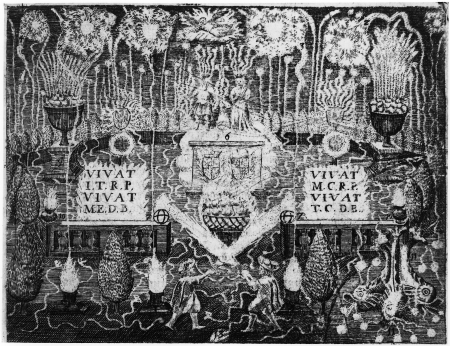 An anonymous Poznań engraver: Fireworks in Poznań in honour of Teresa Kunegunda Sobieska, elector’s wife, picture from the collection of the National Library in Warsaw.

Teresa Kunegunda (1676–1730), the beloved and spoiled only daughter of the royal couple, nicknamed by her father a “Sit-upon”, was heartbroken when leaving Warsaw (for good, as it later turned out). Married per procura to Maximilian II Emanuel, Elector of Bavaria (on 15 August 1694 in Warsaw), Teresa was leaving her saddened parents who feared that they might never see her again (which indeed proved true in her father's case). A Jesuit at Sobieski's court, Fr Maurycy Vota observed that the princess was leaving “after days of weeping and taking with her the hearts of both the king and the queen”.

The journey from Warsaw to Brussels lasted around 50 days and was recorded in a number of accounts, including an anonymous handwritten diary (currently in the Library of Kórnik) and other mainly German printed sources. Hence it is easily retraceable. A German printed material “Theatrum Europaeum” from 1694 relates that, “on 13 November Her Highness Sobieska, wife of Elector of Bavaria, finally left Warsaw accompanied by the Bishop of Płock Andrzej Chryzostom Załuski and Teresa Słuszka, wife of the Castellan of Vilnius. She left with her retinue composed of 250 people and 350 horses on her way through Poznań to Brandenburg”. Nearly 3 thousand noblemen alone, not including burghers, gathered in Poznań where Teresa Kunegunda was greeted with a great pomp. The diary's author went on to say that, “the retinue travelled from the church to the castle where we were treated honorificentissime et magno sumptu [with the utmost honour and at a large expense]. Various sorts of flames were blazing on horse bridles and letters were arranged as initials, only disrupted a little by the wind (...)  Unbelievable cum quail apparentia [with what splendour] we were welcome”. Other written sources reveal that the city of Poznań raised a triumphal gate, “which was quite maiestuosa” and arcus triumphales for the ceremonial entry of the elector's wife. “Music was playing, canons were firing, wine and glasses were not spared. Tandem ignes artificialis [eventually fireworks] so beautiful and unparalleled were displayed which continued co in multa noctem [until late at night]”. Let us add that the fireworks lasted 60 minutes and delighted all the gathered viewers.

To commemorate these events, Andrzej Rudolf Margowski wrote Porta triumphalis, augusto destinata ingressui Dum Serenissimo Principi Maximiliano II (…) & Serenissima Princeps Teressia Cunegunda, printed in 1694 by Typis Academiae Posnaniensis in Poznań and illustrated with one print depicting the fireworks. The small unsigned copperplate engraving was probably made by a rather mediocre printmaker active in Poznań. It is worth stressing however that it is extremely difficult to represent fireworks in print, especially when using a burin, since firework displays by nature take place at night time. A definite drawback is lack of colours, replaced in the print by light streaks and patches emerging from the black background. The end result is a decorative, yet flat scene depicting tureens with artificial fruit, statues of Jupiter and Juno, a group of three dolphins, shields with inscriptions, globes and skyrockets launched high above all the elements. The foreground presents two young men fencing with fiery swords, as if taken directly from the famous twentieth-century Star Wars.