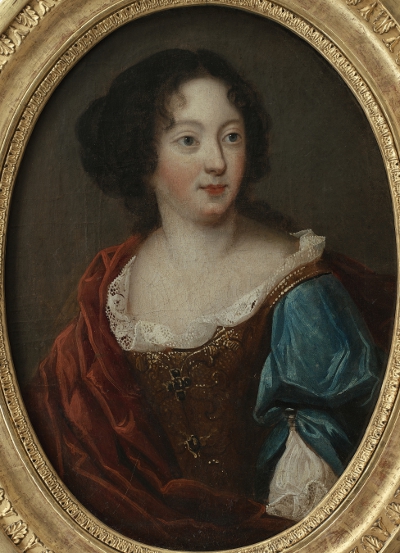 Teresa Kunegunda Sobieska (1676–1730), the daughter of King Jan III and the wife of the Elector of Bavaria. Born on Wawel Hill a month after the coronation of the royal couple. After the death of her older sister Adelajda (1677) Teresa remained the only daughter of the Sobieskis, who called her affectionately “Pupusieńka”.

At the royal court Teresa Kunegunda became a lover of painting and music, and learned Latin, Italian and French. At the beginning of 1692 her father intended to marry her off to the prince of Denmark, but already in January 1693 plans for her marriage to the recently widowed Elector Maximilian Emanuel Wittelsbach of Bavaria, who fulfilled the function of the governor of the Spanish Netherlands, assumed shape. Teresa was to provide a dowry of 500 000 thalers, and Queen Maria Kazimiera consented to cover the costs of the journey to Brussels. On 15 August 1694, the princess married the elector per porcura (the groom was represented by Prince Jakub) and did not set off for The Netherlands until November; she finally met her husband on 1 January 1695.

After the death of Jan III (1696) Maria Kazimiera for a certain time supported the candidature of her son-on-law to the Polish throne  but the elector resigned in the winter of 1697. From The Netherlands, where Teresa Kunegunda gave birth to six children, the couple moved to Munich in May 1701. In 1702, Maximilian Emanuel, an ally of France, initiated a war against the imperial army for the so-called Spanish succession. After initial successes, he was defeated at the battle of Höchstädt (August 1704) and leaving Bavaria appointed his wife the regent. In November 1704, Teresa Kunegunda was forced to sign an agreement with the representatives of Emperor Leopold I, upon whose basis she was granted rule over the region of Munich, while the remaining part of Bavaria was entrusted to imperial administration.

In December, the elector’s wife gave birth to yet another, last son. She maintained lively correspondence with her husband, who remained in The Netherlands. Teresa was also determined to meet her mother, at the time in Rome. In February 1705 she set off from Munich, leaving her children behind, and in March saw Maria Kazimiera in Padua. When in May she tried to return to Bavaria, she was not permitted to cross the Austrian border and was forced to travel to Venice, while the imperial armies occupied the rest of Bavaria. Four sons of the elector were kept by the Austrians in Klagenfurt, while the daughter and the two youngest sons stayed in Munich. In Venice, Teresa Kungenduna spent ten years waiting to join her family until the end of the war for the Spanish succession. In the spring of 1715 all were reunited in Bavaria.

Upon her return to Munich the elector’s wife devoted herself to religious practices, and after the death of her husband (1726), when her oldest son, Charles Albert, mounted the throne, she decided to move to Venice, where she died on 27 March 1739;   buried next to her husband in the Theatine church in Munich. Teresa gave birth to ten children, of whom four died as infants. One daughter became a Poor Clare nun and three sons were bishops.