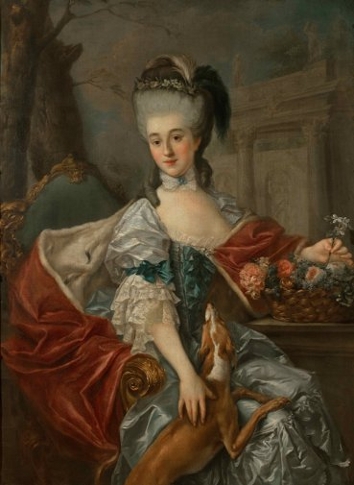 The portrait of Izabela Lubomirska, née Czartoryska, by Bacciarelli has challenged researchers for long. Although its author added the date 1757, it was executed at least more than ten years later – as testified by the sitter’s towering coiffure fashionable in the 1770s. Moreover, she is shown holding orange blossoms, which also adorn her hair and are traditionally connected with a bride. The wedding character of the likeness is indicated by a dog, a symbol of loyalty, accompanying the sitter. Lubomirska however, married already in 1753. Today, it is simply impossible to discover why she commissioned a wedding portrait some twenty years later, and why the painting was not antedated.

The fact that the canvas was conceived as a portrait of a bride is also    evidenced by the blue-white dress. This is not just another wedding gown but an exquisitely elegant one, sewn in accordance with the latest English and French fashion, leading at the time. During the second and third quarter of the eighteenth century the characteristic features of European fashion, influenced by the Rococo, included lightness and sophisticated finish, reflected also, albeit slightly later, in wedding gowns. True, at the time, Polish ladies rapidly adopted fashionable novelties but in the case of a wedding gown the tradition prevailing throughout the entire eighteenth century went back to the sixteenth century. Despite the adaptation of wedding gowns to the current fashion, they were still made of white, heavy fabrics with silver and golden threads or embroidered gold and silver (naturally, this held true only for the young aristocratic ladies and rich noblewomen, who could afford to endow their wedding gowns with a unique character).  The bride also wore a costly bejewelled crown. All these components are missing in the case of Princess Lubomirska.

Regarded to be one of the most elegant ladies in the Commonwealth,  during her numerous voyages abroad Lubomirska had an opportunity to  became familiar with the newest trends in fashion. She probably first saw a light blue satin dress in England, where during the eighteenth century blue, next to white, was the colour of the bride. By the middle of that century wedding gowns called for a reduced number of jewels: ”The bride, instead of wearing a heavy fabric with gold and silver threads, and perspiring underneath a diamond harness, appeared, in accordance with the sophisticated taste of the period, in a gown made of blue and white satin and with no jewels but her eyes, whose glimmer exceeded everything extracted in the Golkonda mines. Her hair was dressed with a small branch of artificial roses...”. This description of the fashionable bride straight out of Tobias Smollet’s novel The Life and Adventures of Sir Lancelot Greaves (1760) matches the robe worn by the princess. Instead of a robe à la française, composed of an upper dress and a wide hoop skirt, she is wearing a dress maintained in the light négligée style, including a soft skirt and a well-fitted sleeveless corset, in front adorned with satin ribbon bows. Underneath, we see the puff white sleeves of a blouse made of a delicate fabric and decorated with blue ribbons and lace. Similarly to the heroine of Smollett’s novel, Lubomirska adorned her hair with flowers and resigned from a diamond crown or jewels. She borrowed the orange blossom from the French; in the second half of the eighteenth century, it was recommended also by fashion journals. In England, orange blossom did not become part of the wedding fashion until the reign of Queen Victoria.

Wedding gowns of this sort, in vogue in Poland during the 1770s, were worn also by other ladies competing with the elegant marshal’s wife. We know, for example, that white and blue was chosen in 1771 by Helena Przeździecka while marrying Michał Radziwiłł. She too resigned from all jewels. More, Helena tried to convince her fiancé to harmonise his clothes with her gown: ”I shall not be wearing anything silver and you, my lord, also should not”, and advised him to resign from an “isabel” colour (an undetermined brown-yellow) in favour of the blue and white    scheme. This corresponded to English customs and the wedding costume worn by the groom in the above-mentioned novel by Smollett. A young couple in clothes of such colours was also depicted in a fresco with the scene of a Wedding in a church in Skolimów (1770s-1780s). In this case, however, the clothes of the groom are a combination of the demands of English fashion with local tradition. Instead of the fashionable tailcoat he is wearing a pale blue zupan and a white kontusz. We could be tempted to say that the wall of this humble village church launched the newest tendencies in wedding clothes, introduced by such leading fashionistas of the period as Izabela Lubomirska and Helena Radziwiłł. This fashion, however, was not accepted for long and in the wake of a revival of the classical mode at the end of the eighteenth century the only dresses launched for years were white ”Grecian” robes worn for all occasions, which contributed to establishing the colour of wedding gowns.