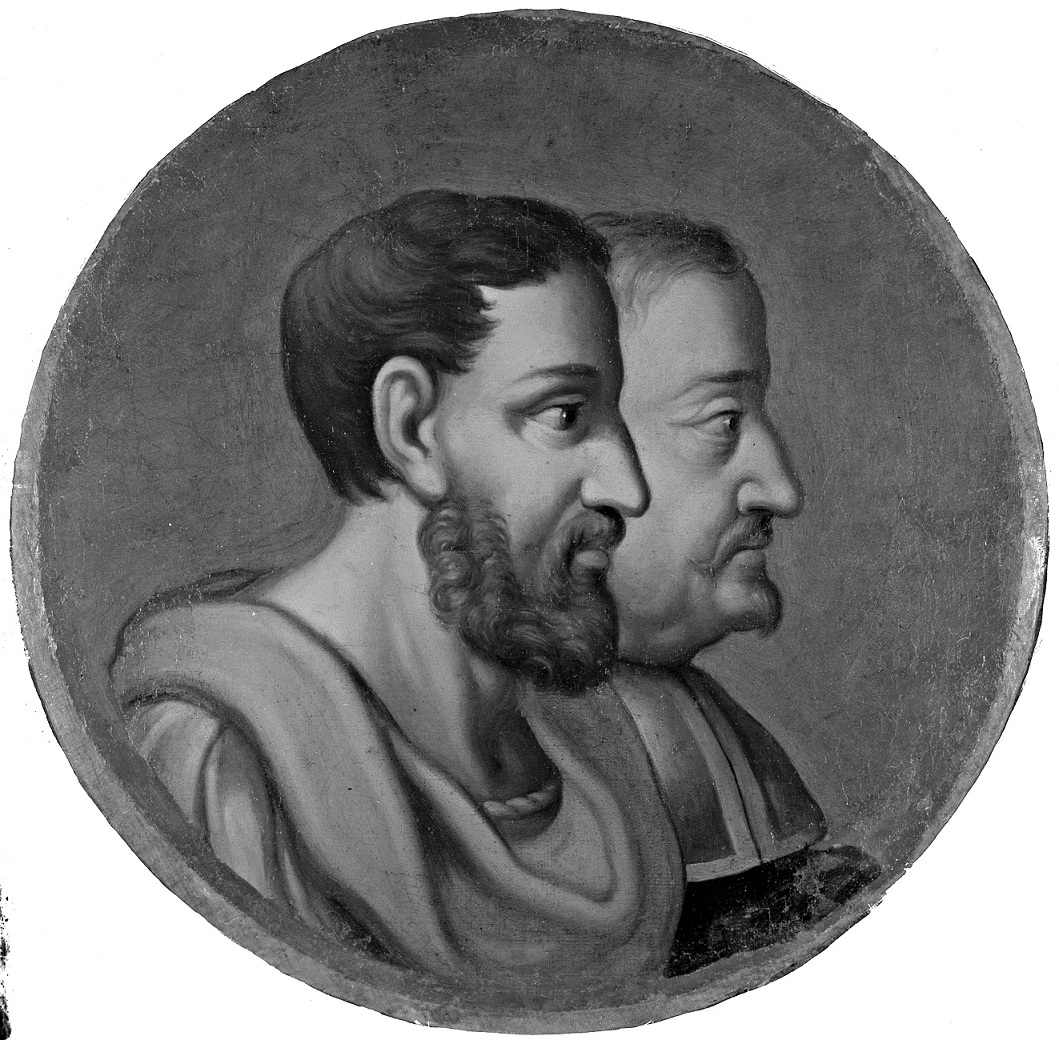 Tondo from the Library in the Wilanow Palace with the images of Justus Lipsius and Aristoteles, Claude Callot, 4th quarter of the 17th century.

Roman historians frequently perceived history as a collection of examples helpful in teaching readers how to lead a proper life. In the introduction to his Books from the Foundation of the City, Livy observed that the knowledge of history is beneficial as it provides good models worth following as well as negative models which readers may strive to avoid. This moralizing trend was reflected in works of the most famous of ancient Roman orators, Cicero. In his book entitled On the Orator he referred to history as ‘the light of truth’ and ‘the teacher of life’.

Modern times saw the appearance of numerous treaties based on ancient achievements and dedicated to the meaning and methods of composing historical accounts. The significance of history and its educational role were also tackled by Szymon Starowolski (ca. 1588–1656) in his Penu historicum (Historical Nourishment). Due to his versatile interests and a large number of published works, already in his life time Starowolski was compared to the eminent Flemish humanist Justus Lipsius (1547–1606) and consequently gained the title of ‘the Polish Lipsius’. During his life Starowolski travelled to The Low Countries at least twice.

The treaty was first released in 1620 at the print shop of heirs to the Venetian printer Damiano Zenaro. It was addressed to students of the Cracow Academy, at which Starowolski had formerly lectured. In his Penu historicum Starowolski quotes mainly two sources, namely a treaty by one of Lipsius’s pupils, Johannes Bernaerts (1567–1601), entitled De utilitate legendae historiae libri duo (Two Volumes on Benefits of Reading History, Antwerp 1593) and a letter of Lipsius himself composed in 1600 on the topic of reading history, addressed to Nicolaus Hacquevillius. Although Starowolski’s work can be considered a contamination, one must bear in mind that contemporary literature displayed a different from today’s sensitivity to the notion of authenticity and borrowings. In the foreword addressed to the reader, Starowolski glorifies Lipsius above all other historiographers. He praises the Belgian’s conciseness, composition and lucidity of argument. As primary source of his work Starowolski quotes the treaty of Johannes Bernaerts. Motifs apparent in the latter author’s writing were borrowed from works of Lipsius himself, mainly from his Politics.

Starowolski divided his treaty into fifteen chapters arranged in a number of topic-oriented groups. They are: issues concerning life in a society, wherein people may dedicate themselves to activity or contemplation; necessity to learn the history of all scientific fields; potential charges against history and ways of refuting them; questions relative to methodology of writing true history; instructions for readers of historical books; a general and a more detailed division of history; stylistic issues.

In his work Starowolski keeps recalling the ancient culture. He often refers to ancient authorities in support of his arguments. And yet, the author is far from uncritical. In fact, he quotes charges levelled against some of ancient historiographers. He finally defends historiography and lists the names of those historians who in his opinion proved to be the best of all times.

When defining the term ‘history’, ‘the Polish Lipsius’ follows the tradition which attributes it a double role, namely instructive (parenetic) and directive (managing one’s behaviour). He believes that the knowledge of the past is the best way of gaining prudence (prudentia). According to Starowolski, knowledge of the past constitutes the key working tool for theologians, lawyers, doctors and philosophers. Since history encompasses events unlimited to the life span of a single generation and a given location, it is helpful in understanding and predicting rules impacting present and future events. Starowolski claims that people unaware of history ‘will never be able to have a correct evaluation of what is beneficial for them, their state and their families’. In his understanding, knowledge of the past has a useful dimension and consequently it impacts the fate of a country as well as that of individual citizens. Years earlier, Plato had advocated the exile of poets from a perfect state. Likewise, ‘the Polish Lipsius’ echoes Bernaerts by calling for banishment of deliberately lying historians. Starowolski adopts a fundamental division into history as described by poets (mythical) and the real one. ‘Although many [writers] before me worked laboriously on this issue, yet in my opinion none of the classifications of history made so far is more legitimate and diligent than the one put forward by Lipsius’, the author explains. The rather complex classification adopted by Starowolski in line with Lipsius provides a clear systematization of the past. It separates legendary history from natural history and history of religion.

The author recommends attentive, not hasty reading of a historical book, enabling the reader’s reflection over its potential benefits. The book may prove helpful in living a fulfilling life. Apart from ethical benefits, the act of reading historical books can also supply material for an orator who may borrow selected expressions and stylistic means from a given piece of writing. In fact, Starowolski’s style abounds in such borrowings and thus offers potential readers a splendid intellectual feast.