The Sobieskis’ Janina coat of arms 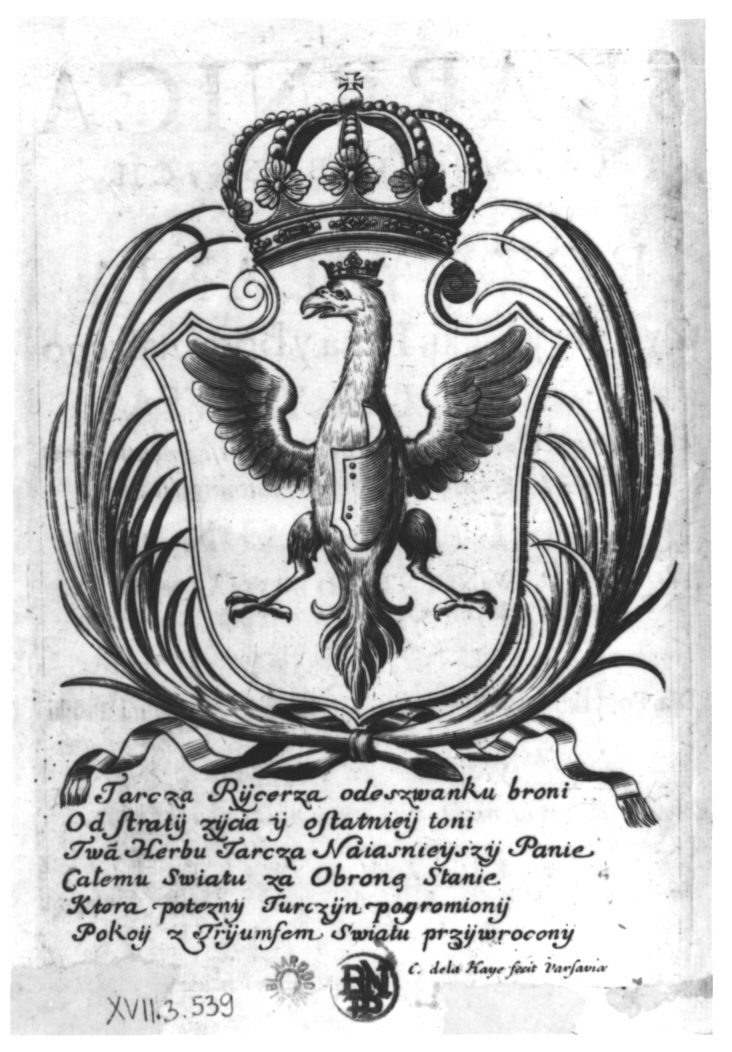 Charles (Carl) de La Haye: The Sobieskis’ Janina coat of arms, copperplate engraving, picture from the collection of the National Library in Warsaw.

In 1693 in Cracow the printing house of Mikołaj Aleksander Schedl, “His Majesty’s Term Typographer”, published a religious work by Vincenzo Bruno entitled Skarbnica taiemnic boskich albo rozmyślania żywota y męki Pana y Boga naszego, Jezusa Chrystusa [Treasury of divine mysteries or reflections upon the life and Passion of our Lord, Jesus Christ], dedicated to King Jan III Sobieski. The dedication was preceded by a copperplate engraving by Charles de La Haye (signed C. de la Haye fecit Varsaviae), depicting the Sobieski family’s Janina coat of arms and accompanied by six verses. In terms of the composition and style, the print constitutes a pendant to a print with the coat of arms of the family de la Grange d’Arquien, which illustrated another of Vincenzo Bruno’s publications, namely Delicye nieba y ziemie [Dainties of heaven and earth], also published in Cracow the same year (1693).

The previously unpublished copperplate engraving of elaborate decoration represents the crowned White Eagle with the Sobieskis’ coat of arms in a cartouche, framed from the sides by crossed palm branches and topped with a closed royal crown. Underneath the composition the printmaker included the following six-verse inscription: Knightly escutcheon shall keep us unhurt / From weapons and death and depths of despair / Your Royal Highness, Thou escutcheon shall / Protect the entire world from all harm / The same that vanquished the powerful Turk / Ensured Thine Triumph and Peace to this Earth.

Among many families bearing the Janina coat of arms there were the Sobieskis of Sobieszyn located in the Lublin voivodeship. The seventeenth- and the eighteenth-century heraldists, historians and panegyrists attempted to establish the roots of the coat of arms and the family. To quote but two examples, in his Orbis Polonus armorial (1641–1645) Szymon Okolski, a Dominican, searched the Sobieskis’ origins as far as the times of Bolesław Chrobry [Bolesław the Brave], while Wojciech Stanisław Chrościński (1717) went even further back in time to the period of Lech I. Jan III himself conducted his own research, prompted by the Papal nuncio. The outcome was an interesting document known from its eighteenth-century copy, entitled Ekscerpt z manuskryptu własnej ręki Najjaśniejszego Krola Je Mci ś.p. Jana Trzeciego [Excerpt from the manuscript of His Royal Highness the late King Jan the Third] (printed by Franciszek Kulczycki). In line with his family tradition, the monarch strove to find his ancestors in the times of Leszek Czarny [Leszek the Black]. He eventually gave up these attempts and began relating his family history from the sixteenth century onwards, starting with his grandfather Marek Sobieski (in fact, Jan III’s critical and objective approach rendered the discussed document fully credible, precious and verifiable with other data). More recent studies made by Tadeusz Korzon and Włodzimierz Dworzaczek determined that the first unquestionably well-known ancestor of King Jan III was Sebastian Sobieski (ca. 1486–1557), referred to in documents as nobilis, or simply a nobleman.