A Polish Great-Grandmother of an Italian Dynasty

A Polish Great-Grandmother of an Italian Dynasty Hanna Widacka 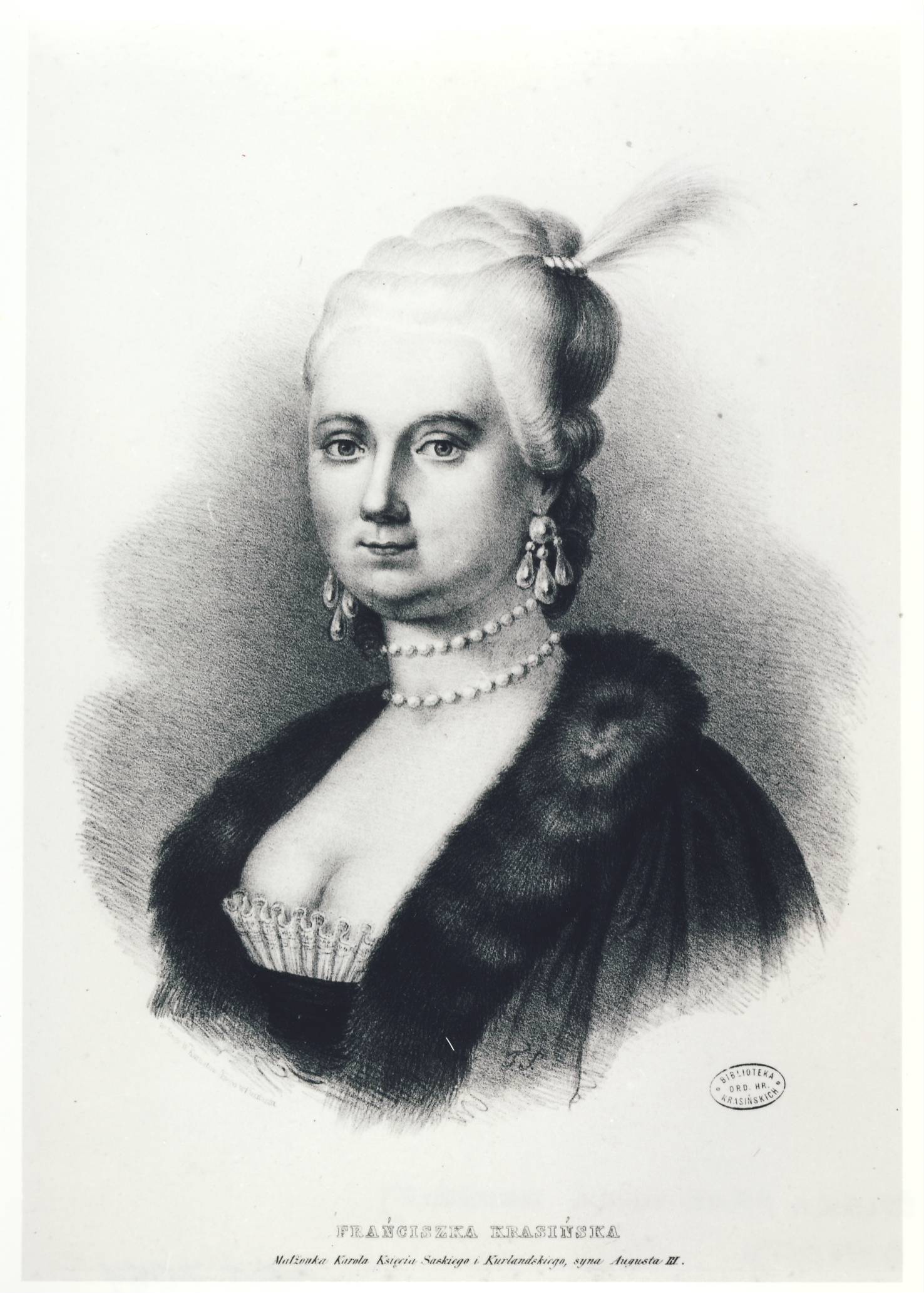 Franciszka Krasińska (1743?–1796), daughter of Stanisław, starost of Nowe Miasto and heir to Maleszowa and Węgrów, was famous not only for her beauty and charm but also for fine character traits (gentleness, nobleness and disinterestedness). Combined with the careful education she received, these characteristics made her a very attractive eligible young woman. Indeed, many were her suitors but all beaten to it by Prince Carl, son of Augustus III. The “blossoming rose” caught the fancy of the young Wettin, described by historian Władysław Konopczyński as, “a fair, likeable defender of his father’s honour, a hunter and dancer (…) who courted in the Polish fashion, truly liked the Poles and was truly liked by them in return.” The prince found it relatively easy to unfold brilliant perspectives before his chosen one, reaching as far as the royal crown. It is therefore not at all surprising that Franciszka married Carl, the then Prince of Courland. The secret wedding took place in Warsaw on 25 March 1760.

However, the mirage marriage failed to make the charming princess happy. As the aforementioned Konopczyński observes, “Although Augustus III did not drown his daughter-in-law in icy waters [an allusion to Gertruda Potocka’s fate], but instead overwhelmed her with proud, icy coolness. The wedding was treated as non-existent, and Franciszka regarded as mademoiselle Françoise.” What is worse, pressed by his family Carl soon cooled in his zeal and in 1763 went to Dresden for good. He showed no intention to live with his spouse (not to mention sharing his bed), nor to provide for her decent living. Franciszka wandered between various locations in Poland, haunted by distress and financial worries. Abandoned, she got eagerly involved with the Bar Confederation, giving herself to the movement and becoming possibly the most sympathetic of all its female activists. As a result of intervention by Empress Maria Theresa and Zofia Lubomirska the ungrateful prince eventually consented in June 1775 to welcome his wife to his home. The spouses lived together in the castle of Elsterwerda in Saxony. When the marriage was acknowledged, a year later the Sejm of the Commonwealth secured an annuity due to Franciszka as a Polish princess. Living a rather lonely life, not free from financial difficulties and tribulations caused by the court , the Princess of Courland died in April 1796 following a two-year-long battle against breast cancer.

The discussed print depicting Franciszka is a lithograph made after 1840 by Fabian Sarnecki (1800–1894) in the atelier of Wiktor Kurnatowski in Poznań (the print copy was at the time priced at 20 groschen in silver). The print was created after an unknown model. The image shows no affinity to either the princely family portrait by Anton Graff (two versions dated to circa 1791 and a copy by Jan Nepomucen Bizański made in 1856), to the anonymous pastel drawing (after 1760) housed at the Krasiński Museum, or the painting from 1750–1775 based on the said pastel, part of the Wilanów Palace Museum collection.