Aleksandra and Izabela Potocki Taking a Stroll near Lake Albano 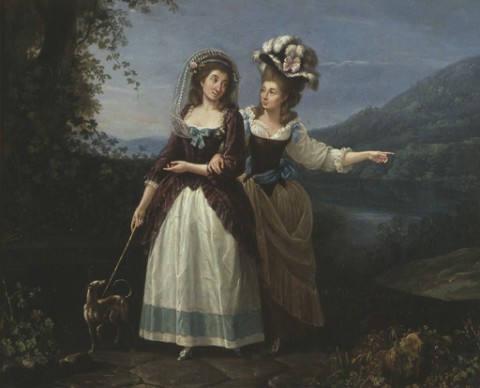 A piece of paper glued to the reverse of the canvas claims that the painting was made in 1788 (402 Countess [Aleksandra] Stanisławowa Potocka née Countess Lubomirska and her sister, [Izabela] Ignacowa Potocka, painted in Italy in 1788 [sic!], by Labruzzi, landscape with Lake Albano). This is clearly incorrect as Izabela Potocka had died before that date. According to other historical evidence, the work may have been painted during the two ladies' Italian journey in 1779-1780. The sentimental picture shows the sisters taking a walk in a picturesque landscape identified as Lake Albano. The painter painstakingly depicted the fashionable dresses and hairstyles of his aristocratic models, and placed one of them (Aleksandra) in the pleasant company of a little dog. It has to be noted that the features of the two ladies are well-observed and betray a distinct similarity to their likenesses by other artists. We know the route of their journey from their letters to Ignacy Potocki (see catalogue). Aleksandra and Izabela travelled with Stanisław Kostka Potocki and Grzegorz Piramowicz, and they reached Rome early in December 1779. Here, the sisters commissioned their portraits from the renowned Pompeo Girolamo Batoni. Although their correspondence contains detailed information about the Batoni portraits, no reference survives to Carlo Labruzzi, a portraitist and landscape painter who was also active in Rome at that time. Nevertheless, the two ladies seem to have known him well. The Wilanów Library contains Labruzzi's illustrations based on Jean-Jacques Rousseau's La nouvelle Heloise, probably purchased that the same time (currently held in the special collection of the National Library in Warsaw). The Wilanów collections also contain landscape by Labruzzi depicting Stanisław Kosta Potocki's idyllic estate in Olesin and mentioned in 1798 among the paintings in their Warsaw palace. Another piece of evidence connecting Stanisław Kostka Potocki and Labruzzi comes from the Italian diary  of the former from the period 1779-1780, where an entry records the payment of 140 florins to the painter (AGAD, APP 255, sheet 28, verso). It has been suggested that the price of this portrait may have been included in the payment. The name of Labruzzi reappears later in Potocki's letter to his wife written in Naples on 28 December 1785. Potocki mentions that his mother-in-law and himself intend to buy some landscapes, including ones by Labruzzi. Why this portrait originally belonged to Lubomirska is not clear - she may have commissioned it or possibly received it as a gift.

The portrait is listed in 1781 as part of Izabela Lubomirska's collection in her palace in Warsaw; it was later owned by the Potocki family and was first recorded in the Wilanów collection in 1834. 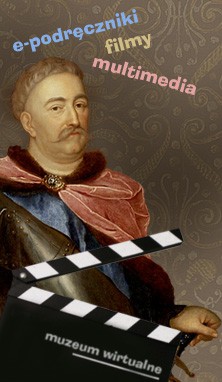