Marcin Altomonte in the service of Jan III Sobieski 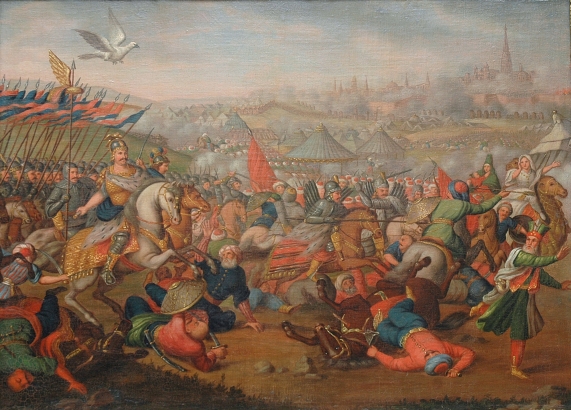 Battle of Vienna, according to Marcin Altomonte, 19th century.

Marcin Altomonte (1657–1745), an Italian painter of battle scenes, was brought over from Catania or possibly Naples prior to July 1684 by the Capuchin monk Marco d’Aviano to the court of Jan III Sobieski. Initially, he redecorated royal residences near Lwów – Żółkiew and Podhorce  (information supplied by Edward Rastawiecki claimed that he also decorated the palace in Wilanów, but so far it has remained unconfirmed by the preserved paintings and sources).

Archival material confirms the artist’s stay in Warsaw from 26 December 1690 to 8 June 1698. Altomonte married Barbara Dorota Gierkien (Guerquin?), baptised their four children and was a witness at the wedding of his colleague, the artist Jerzy Eleuter Szymonowicz-Siemiginowski. In accordance with the intentions of Jan III Sobieski, Altomonte was to commemorate the victory at Vienna: we cannot say with all certainty that he could haoe actually seen the Vizier’s camp at Vienna. He certainly did see it at Żółkiew on 25 July 1684, when the victorious monarch held in the castle bestiary a special show to mark the occasion of a visit paid by a papal nuncio, a Venetian envoy and other guests. This was the time of the origin of preparatory sketches, partly preserved in the so-called Melker Skizzenbuch containing, i. a. scenes of Sobieski’s battles and drawings of Turkish tents, the weapons and equipment of the Polish hussars, saddles and stirrups, shields, etc. Upon their basis, in 1684 the artist executed a pen drawing of the Battle of Vienna (Museum of Fine Arts in Budapest) and in the following year a signed and dated oil sketch on canvas (Chorherrenstift in Herzogenburg in Austria). Work on the final version, intended for the parish church in Żółkiew, lasted for almost ten years (until the turn of 1693). At the same time, Altomonte executed a pendant – Battle of Ostrzyhom and Parkany. Today, both canvases, each 765 x 738 cm, are kept at Olesko Castle (department of the Lviv Art Gallery), and were conserved already in the nineteenth century “by the painter Józef Engerth [Rastawiecki] financed by the Estates of Galicia”. At the end of the twentieth century, the state of both canvases and the manner of their display at Olesko Castle became unsatisfactory: due limited space, Battle of Vienna was shown only partly, and Battle of Ostrzyhom and Parkany, much damaged and not on display, was still awaiting conservation. It must be explained that today Altomonte’s authorship of eight non-extant battle scenes from 1685, intended for Żółkiew Castle, recorded in an inventory from about 1740, and proposed by Mariusz Karpowicz in 1966, is questioned and rather difficult to retain.

The two Żółkiew paintings were copied in nineteenth-century graphic works from Lwów (mainly lithographs), and during the twentieth century  were described in detail by Aleksander Czołowski in his Ikonografia wojenna Jana III (Warszawa 1930). The presented lithograph: Battle of Vienna Waged by King Jan III on 12 September 1683 was executed by Karol Auer (1818 - ?), a Czech living in Lwów during the 1840s and a steady collaborator of the lithographic studio of Piotr Piller. The composition, a contour outline, records the main part of the painting: an ”eagle from Kalemberg, an omen of victory” flies over Sobieski mounting his dun horse Pałłasz.