Plica polonica, or the Polish kołtun 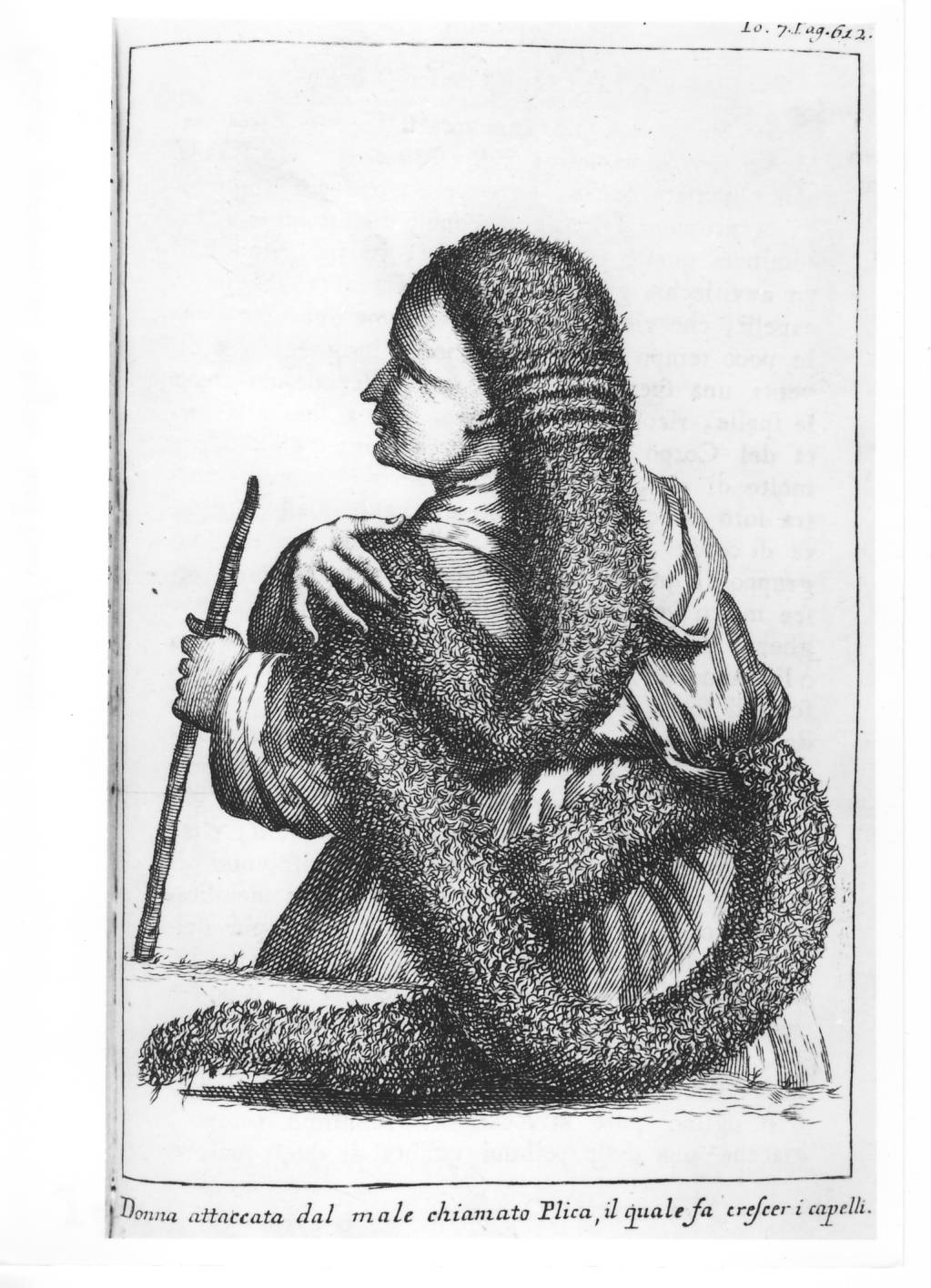 Kołtun, picture from the collection of the National Library in Warsaw.

Kołtun means a matted lump of hair, the result of dirt and the refusal to use a comb, usually accompanied by lice. Its name comes from kiełtanie się, i.e. the swinging motion of the tangled hair. Formerly quite universal, in the West, it vanished much earlier than in Poland, although the average European of the Baroque era and the Enlightenment carefully avoided washing his hair. The kołtun thus affected everyone, regardless of their status and origin, but usually occurred among the peasants. The invaluable Jędrzej Kitowicz claimed: ”Kołtony are to be found in the whole of Poland, are quite frequent in Lithuania, and are encountered most often in the Duchy of Mazovia, especially among the peasantry ( ...) to such an extent (...) that two out of three peasant heads feature the kołtun”. The kołtun assumed different shapes: ”slight, thick, single, resembling a cap, divided into strings, smooth or knotty at the ends”.

Initially, the kołtun was not associated with the lack of personal hygiene, and it was believed that it was a symptom of rheumatism. The cause of this misfortune was sought predominantly among witches, especially Polish ones, as confirmed by the Latin name of this affliction - plica polonica, and its German version– Weichselzopf (since it was encountered most often in Poland, along the banks of the Vistula). The presence of a kołtun supposedly produced ”inflammation of the bones, aversion to food, bad eyesight”, and sometimes even “vomiting”.  It was believed that simply cutting off this malodorous bunch of hair was extremely hazardous and could result in blindness, deafness, insanity, bleeding and even death caused by convulsions. Those brave enough to perform this act were thus scarce. The few who decided to take such a step and got better without any horrible consequences donated their ”nails” to churches to protect themselves against the revenge of the kołtun. As late as the early nineteenth century Polish physicians believed that pregnant women have a natural predisposition towards the kołtun, while young men suffering from it were excused from serving in the tsarist army.

Fortunately, not all medical doctors regarded the kołtun to be a disease. William Dawson (c. 1593-1669), Scottish physician, chemist, botanist, and court musician of Jan Kazimierz Vasa and his wife, Ludwika Maria Gonzaga, proved to be extremely progressive for his times. He fearlessly cut kołtuns off and advised combing and frequent washing of the hair. A similar attitude was represented in the early eighteenth century by Tobiasz Kohn. ln 1862, Professor Józef Dietl (1804-1878), rector of the Jagiellonian University, finally put an end to the kołtun by proving its origin and the lack of any connections between cutting it off and illnesses.

The theme of the kołtun appeared extremely rarely in graphic art. Interesting examples include an unsigned Italian aquaforte showing a woman afflicted by this condition: a thick and long kołtun, resembling a boa constrictor, slides down her back. The engraving, possibly by Felicita Sartori (d. 1760 in Dresden), illustrated Thomas Salmon’s Lo stato presente di tutti paesi, e popoli del mondo, naturale, politico, e morale, published in volume 7 about the Commonwealth of Two Nations (1739), part of the 26 volumes printed in Venice in 1734-1766.