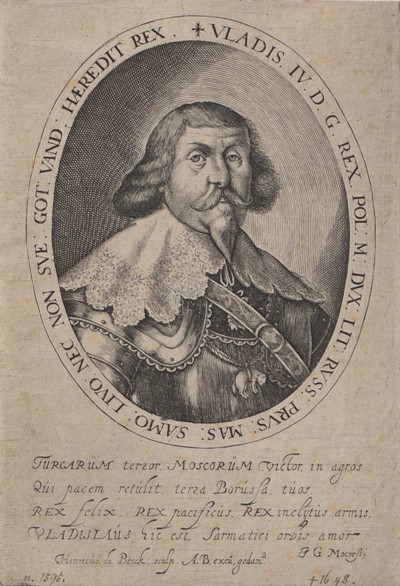 For over 200 years the Polish-Lithuanian state was trying to avoid a conflict with the Ottoman Empire, and when attacked, it was able to defend itself, as in the years 1620–1621 and 1634. However, in the 40s of the 17th century, in the privacy of the royal cabinet a plan was born of a great war with Turkey which would oust the Ottomans from Europe and liberate the Slavic peoples from the rule of the Muslims. It was also to glorify the name of the originator of the plan, Polish King Władysław IV, who had dreamed of another crusade ever since the Khotyn war. He did not manage to cross swords with the followers of the Prophet in 1634, when Crown Hetman Stanislaw Koniecpolski resisted the Turkish invasion of Abaza Pasha, but still hoped to be able to face the Sultan’s army and beat it one day.

The hope revived as early as 1637, when the Ottomans fought a difficult war with Persia. The Persian Shah himself then urged Władysław IV to join the war, and the idea was supported by Hetman Koniecpolski. However, the peace-oriented nobility and magnates made the King abandon those plans. Soon, just a few years later, he began to spin war plans again. He wanted to conquer the Danubian Principalities (Moldavia and Wallachia), which was to ensure for his little son the Polish throne in the future, and thanks to a great victory over the Ottomans to strengthen royal power. It was also important to get rid, once and for all, of the troublesome Tatar neighbourhood. The only thing that was left to do was to somehow convince the nobility. It was feared that they would be reluctant to the idea which meant a substantial tax burden, but the royal court counted on the growing popularity of slogans referring to the defence of the Holy Cross. In recent years, it had become notorious again in Europe, and within the Commonwealth itself there were numerous political writers calling for a crusade. A favourable circumstance was the fact that the success in the Khotyn war convinced the nobility that the Turkish state was not so strong as in the times of Suleiman the Great. However, it was not forgotten that the vast territory and the size of the Sultan’s army aroused in the nobility fear and respect which required to avoid conflicts with the Ottomans. Therefore, the King, expecting trouble, decided to prepare the nobility aptly for the idea of war with the enemy of the faith.
From 1640, every parliamentary assembly attempted to provide plans for the King who intended to „raise the Holy Cross against the enemy” and „save the churches and heritage of God ... from the hands of pagans”. It was suggested that it was better to attack the enemies in their own nest (i.e. Istanbul) than to chase the Tatars throughout the steppe. The process of preparation was accelerated by the Ochmatov victory over the Tatars in 1644 and the inflowing messages about the Turks starting to prepare for war with Venice. The latter meant that the Ottomans would have to divide their forces and Poland might gain an ally. A diplomatic action was undertaken by addressing mainly Moscow with a proposal of a joint attack on the Crimea and the removal of Tatar neighbourhood which annoyed both the countries. What was needed was only the consent from the Sejm which met at the beginning of 1645; however, it was dismissed without adopting resolutions, which prompted the King to act on his own. He planned to provoke a conflict with the Tatars, irritated by the Polish-Lithuanian Commonwealth’s refusal to pay gifts, in order to have a pretext to initiate a war of defence. At first, everything went as the King planned. Soon the news came from Istanbul that the Sultan allowed the Khan to invade the Commonwealth’s lands. The plan was simple. The Tatar invasion was to serve as an excuse to take an offensive against the Crimea. The royal army was to enter Moldova supported by the Ukrainian magnates’ forces, the Cossack fleet was to appear in the Black Sea, effectively paralyzing the defence of Crimean coast and Turkish territories.

Since a possible war with the Tatars would have to entail a conflict with Turkey, the decision was to prepare for it. And, at this point, serious problems emerged; the King did not have the Sejm‘s consent and lacked the funds. The latter issue quickly found a solution. Venice, the Pope and Muscovy, attacked by the Turks, were to come to the aid of the Commonwealth. The first two allies were primarily to provide money for military recruitment, while Moscow was to support the royal army in the invasion of the Crimea. After some complications, funding from Venice was promised in 1646, and soon the Wallachian and Moldovan Hospodars’ and the Tsar’s envoys appeared in Warsaw, all of them eager to talk about the future war. There also came the Orthodox patriarchs’ messengers from the Turkish territories and representatives of the local Orthodox monasteries who declared the Slav peoples were ready for armed resistance against the Ottomans as soon as the royal army invaded their lands. From France, in turn, came the words of encouragement and vague promises of help. It was therefore no wonder that although Hetman Stanislaw Koniecpolski, one of the main performers of the planed attack, died in early 1646, the King began to recruit troops. He also tried to gain the support of the magnates who were to convince the nobility to support the King's concepts.

That was necessary because the information against whom the army was gathered and in what war the country would be engaged quickly spread through the Commonwealth, causing uproar among the nobility and the group of magnates who were not in the know of the plans. Firstly, they were reluctant to incur the costs of war against the country considered by most people to be one of the largest and most feared empires of their contemporary world. Secondly, they were anxious about how the King wanted to pull Poland into the conflict. Secret conspiracies, confidential agreements with the neighbours, gathering the army without the consent of the Sejm, even secret talks with the Cossacks and giving them promises in exchange for their participation in the war – all that infuriated the public opinion. The main political struggle took place at the Sejm in 1646, when, after many arguments, Władysław IV was forced to dissolve already recruited troops, and thereby to abandon his plans for a war.

The King’s concession was only a political manoeuvre. With the support and promises of financial aid from Venice and the Pope, and a pact with Muscovy on help in fight against the Tatars, Władysław IV began to prepare a provocation. He did it despite the conciliatory gestures from the Sultan who during the 1647 Sejm sent an envoy to Warsaw to confirm his desire to remain in peaceful relations and to express his sharp criticism of the concept of war. In the autumn, two military expeditions set off for the steppes, led by Jeremi Wiśniowiecki and Aleksander Koniecpolski. Their aim was to cause damage in the Tatar lands and provoke the Horde Tatars to attack the Commonwealth. However, they failed, and the King had to come to terms with the disaster of his plans. The only effect was a growing ferment among the Cossacks, who had placed great hopes in the war. When the chance to improve their lot was ended, they took up arms to fight for their rights, but this time against the Commonwealth. They were led by Bohdan Khmelnytsky.

The question is whether the King had any chance to win. It must be admitted that even the involvement of the Ottoman Empire in Crete, which would certainly facilitate the task of Polish forces, did not offer chances for success greater than the conquest of the Danubian countries. A complete victory over the Turks could not be expected, since even the Holy League failed to achieve it decades later. Władysław IV’s plan was a mere fancy which would engage Poland into a dangerous conflict. After all, until the end of the 17th century none of the countries neighbouring the Ottoman Empire risked war with it. The King failed both to win allies to support him with their troops and to convince his subjects to begin the conflict. However, it is noteworthy that the Sultan ‘s court was very concerned about the Polish monarch’s war plans and did not want an open conflict. But if it had happened, Turkey certainly would have concentrated on that front all the forces it then had, even by withdrawing part of them from Crete, where they fought with the Venetians. This in turn could lead to the concentration of the whole Turkish power of that time on Poland alone.