Polish Converts to Islam in the Service of the Sultan 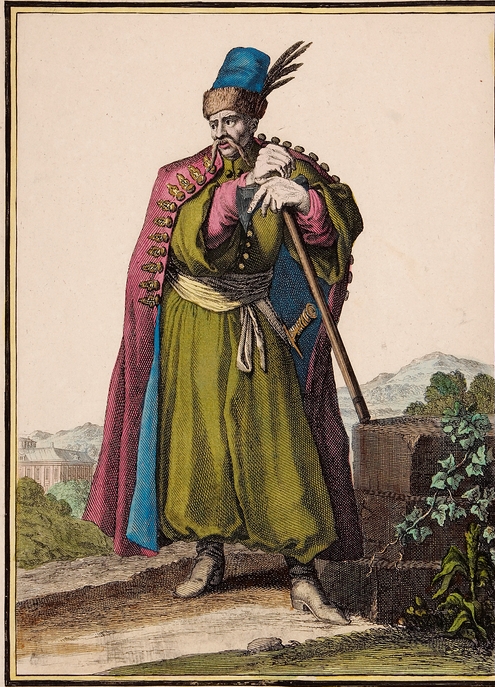 Polish hajduk from the end of the 17th century, lithograph by Caspar Luyken

The phenomenon of converting to Islam and joining in the service of the rulers of the Ottoman Empire was not uncommon in the modern era. Many, as they were called, renegades played a significant role in the Muslim administration and army, often reaching the highest positions in the state, e.g. the Grand Vizier to three successive sultans, Sokollü Mehmed Pasha, a Bosnian Orthodox priest’s son. Among Christians who converted to Islam, the majority were men taken captive in their childhood or adolescence, before turning 15 years old. Young slaves’ exercising religious practices under the influence and in the company of their owners who often treated those young people in a fatherly way, or compulsory education in Koranic schools played an important role in the adoption of the new faith. Some of the slaves were sent to special schools for the training of the future Janissaries or Sipahis, and those who were characterized by beauty, good physique and intelligence, to the Page Corps. They were trained there to serve at the Sultan’s court or at the central or provincial administration.

Those were mostly people from the Mediterranean region; however, Poles and Ruthenians were not scarce, either. The majority of captives coming from the area of the Polish-Lithuanian Commonwealth found themselves in Turkey as a result of being abducted in childhood or youth by Tatars and sold to Turks. The older ones were sent to private persons to work in their new owners’ fields or at their homes, or ended up as rowers on the benches of the Ottoman galleys. The fate of the latter was tragic, because they did not have any chances of release. The former could either buy themselves out or convert to Islam. The situation of children who went to the aforementioned schools or to the service of the rich Turks was quite different. In this group, we know about a few people who made a career at the court of the Sultan.

The first Sublime Porte’s representative of Polish descent was Zygmunt Laskowski, bearer of the Trzaska coat of arms, who, as a Chaush (messenger) carried a letter from Sultan Bayezid II to King Sigismund I in 1511. An example of a definitely greater career was John Kierdej, son of Zygmunt Kierdej, the Trembowla Governor. In 1498, when he was eight, he was captured by the Turks during the siege of his family castle in Pomorzany in Red Ruthenia. Brought up in the Page Corps, he converted to Islam, assuming the name of Said. He worked in the office of the Sublime Porte, where he was noticed by one of the viziers - Ibrahim Pasha (1523-1536) – and, owing to his knowledge of the Polish language, assigned to diplomatic missions in Poland. He first arrived in his former homeland in 1531, and continued to be an envoy to Poland a few more times. Although he actually was a Turk, in Poland he was still considered to be a Pole and enjoyed popularity with the royal court and the senatorial elite. He himself, until his death in 1557, rendered assistance to  all the envoys of the Commonwealth arriving in Istanbul. For his faithful service, he was awarded by the Sultan a title of Beg, property and the social status of Sipahi.

His contemporary, but younger, Joachim Strasz, bearer of the Odrowąż coat of arms, was much more successful in his career. Born in the early 16th century, he was taken into captivity as a young boy. He graduated from the elite Page Corps and then became the guardian of heir apparent Prince Selim (later Sultan Selim II). The friendly relationship then established between them continued to be very stable, and Strasz - who in Turkey was called Ibrahim the Beg – enjoyed Selim II’s favours till the end of his life. As he knew not only Polish and Turkish but also Latin and Arabic, from 1540 he worked in the office of the Sublime Porte and on its behalf he used to travel as an envoy to Poland, Spain and Vienna. The crowning achievement of his career was that in the years 1551-1571 he held the office of Grand Dragoman, the Porte's principal translator. That meant that he found himself in the close milieu of the monarch, which position, besides, he used to serve Poland’s interests influencing to some extent the Sultan ‘s policy towards the Commonwealth. In return, the royal court in Krakow paid him a high fixed salary (it was then common for European royal courts to pay influential people at the Sultan’s court) in order to exploit his influence with the Ottoman court. In the history of the Ottoman Empire, there was another chief translator for the Porte of Polish descent - Ali Bey, i.e. Wojciech Bobowski, born in Lvov around 1610, deceased in Istanbul in 1675. He was abducted by Tatars and brought up at the Sultan’s court where he received a thorough education and reportedly knew more than ten languages. He held the office of Grand Dragoman between 1671 and 1675 and maintained extensive relations with many European travellers and diplomats. Among other things, he was the main informant for the private secretary to the English ambassador in Istanbul, Paul Rycaut, the author of “The Present State of the Ottoman Empire”, a compendium of knowledge of the Ottoman Empire, published in Polish in 1678.

Information about Polish plebeian converts to Islam can be found in a number of sources. The Jesuit Stanisław Solski, staying in Istanbul in the years 1654-1662, met Poles and Ruthenians in the galleys and at homes of wealthy Turks, at slave markets and in the ranks of the Turkish army. Many of them bought themselves out of slavery and decided to stay in Turkey to pursue a career in trade or craft. There were also those who voluntarily emigrated from Poland and settled in Istanbul or in other cities of the Empire. Some, especially plebeians, were tempted by an opportunity to build a much bigger career than in Poland – e.g. a man named Hussein “a Christian son after all ... a native of the Polish Crown” who was a Sipahi and had a timar (a manor). Others fled from justice, e.g. a man named Stanislaw Jaworski, a companion from Field Crown Hetman Mikołaj Potocki’s regiment, who, after committing a crime, fled to Turkey, where he converted to Islam.

The choice of Turkey as a new country and Islam as a new faith had various causes, while Turkey and its people not always presented themselves in dark, menacing tones. There were voices in Poland that people who came across an injustice in their homeland preferred to remain under the Turkish rule: "The slavery under the Turk is not so hard as in our dyed freedom; having paid my tribute I would be free and safe with my possessions" - wrote the author of the Polish translation of “The Present State of the Ottoman Empire”. Those mainly were the residents of Podolia, which in the last quarter of the 17th century remained under the rule of the Sultan. The nobility preferred to emigrate, but the Ruthenian Orthodox peasants who remained welcomed the Ottoman occupation, treating it as a release from the Catholic religious intolerance against the Orthodox Church and from the oppression of the feudal lords. Most of them, in order to obtain tax benefits, embraced Islam. So did the majority of dwellers of Kamyanets-Podilsky, both Russians and Poles. Interestingly, it did not concern their wives; both townswomen and peasant women remained Catholic or Orthodox.

As can be seen, in the modern era there lived in Turkey a large group of Polish converts to Islam who, despite having an opportunity to return to their homeland, would not seize it. Some of them because they did not want to give up their Muslim faith, while others  did not want to waste their hard earned possessions and stability. One should remember that some of them had no one to return to because their home towns and villages were destroyed and their relatives killed. Even if they survived, the laws recognized by the Church authorities in Poland stipulated that people kidnapped by the Tatars were considered to be killed, and the surviving spouse could enter into a new marriage as widows or widowers. However, stubborn reluctance to return did not always turn out well. In the 70s of the 17th century Kosh Otaman Ivan Sirko, having liberated a group of Ruthenians living for several years in Tatar captivity, was astonished when he heard that they did not want to go back to Ukraine. However, surprise quickly gave way to anger and the Otaman ordered to kill everyone.